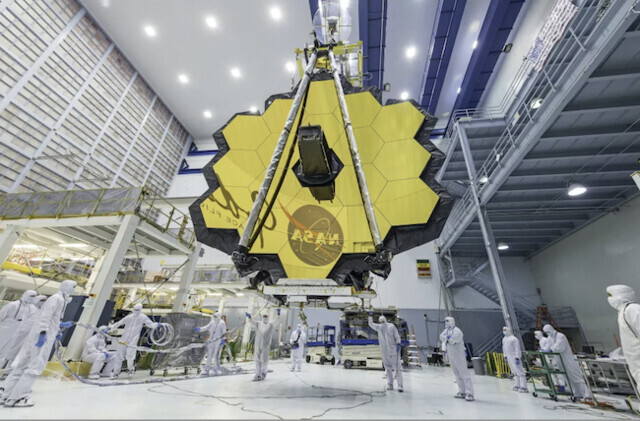 One of the objectives for the James Webb Space Telescope is to find out how soon after the Big Bang galaxies began to form, and when stars started manufacturing the elements needed for making planets and living things.

The JWST is only now coming into action, but already it is giving us some strong hints. This sort of study is possible because looking out to greater and greater distances takes us back in time. Even though light travels extremely quickly, cosmic distances are so huge that the light from stars and galaxies can take from years to billions of years to get to us, depending on how far away they are.

Expressing such distances in kilometres leads to extremely large numbers, which are hard to visualize. We often express these distances in "light years", which is the distance light travels in a year. It we look at a galaxy located a billion light years away, we are seeing it as it was when that light set out on its way to us, a billion years ago.

By looking at more and more distant objects, we see the universe as it was further back in its history. Telescopes are time machines. Recent observations using the JWST show us galaxies like ours existed a mere 600 million years after the Big Bang, just under 14 billion years ago.

The oldest and most distant thing we can see is the cosmic microwave background, or CMB. This dates back to about 380,000 years after the Big Bang, the beginning of the universe, some 13.8 billion years ago.

The CMB is basically an almost uniform glow over the whole sky, emitted when the universe had expanded and cooled enough for light to travel through. However, when that glow is mapped precisely, we see small temperature variations in it. These mark the clumping of material, collapsing under its own gravity, on its way to becoming the first galaxies.

When the universe became transparent, there were no stars to light it. It was dark. We often refer to the time period between the CMB and the first stars as the "Cosmic Dark Age".

We would really like to know when that age ended and the first stars and galaxies formed. We are doing this by using our ever-improving instruments to work our way outward from Earth and back in time, until we stop seeing galaxies, or hopefully, see the first galaxies and stars actually forming.

Of course, when we see one of those distant, faint galaxies, we need to know how far away it is, and thence how far back in time we are looking. Directly measuring such huge distances is extremely difficult. Fortunately, there is a simple, pretty reliable indirect method. We use the expansion of the universe.

This has been precisely measured over decades of work. The speed a distant galaxy is being carried away from us by the expansion of the universe is directly related to how far away it is. A galaxy twice as far from us as another will be receding twice as fast.

The relationship between speed of recession and distance has been extensively measured and has come to be known as Hubble's Constant.

Measuring the speed of recession of a galaxy is fairly easy, so we apply Hubble's Constant and we have a very good idea of that galaxy's distance. So the search is for fainter and fainter galaxies that are moving away from us at ever-higher speeds, placing them at ever-greater distances. This requires ever better telescopes, like the JWST.

The JWST has only just started operating, so its discovery of normal-looking galaxies in existence a mere 600 million years after the Big Bang is encouraging. Their formation must have got under way very quickly. At this point we still don't know how quickly, because we have still not reached far enough back in time.

• Before dawn, Saturn lies low in the south, with bright Jupiter to the left, then Mars and finally Venus, lying low in the dawn glow.

• The Moon will reach its first quarter on July 5.