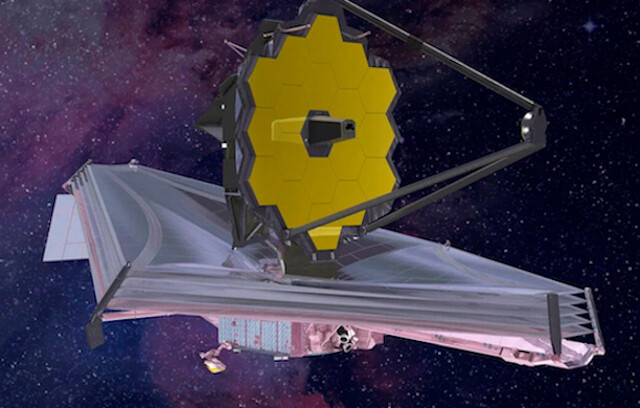 The James Webb Space Telescope (JWST) is almost at its parking place, 1.5 million kilometres from Earth.

It is in full operation, and sending back beautiful images.

Its 6.5-metre mirror, made up of 18 hexagonal segments, is fully deployed, with those segments all positioned to within millionths of a metre (the spacecraft had to be folded up to fit into the launcher).

The mirror is bigger than the one on the Hubble Space Telescope (HST); it can collect around seven times more light and discern finer detail. It will complement rather than supersede the HST.

Rather than observing visible light, which is the purpose of the HST, the JWST will observe mainly at infrared wavelengths. This makes it better for looking at the formation of stars and planets, and for exploring the remotest regions of the universe.

Putting telescopes in space is a lot of work and is expensive, and nobody will be around if something goes wrong during set-up.

The problems with the HST were addressable because its low orbit made it reachable using the space shuttle. We currently have no easy means to get a service engineer to the James Webb Space Telescope.

Ground-based telescopes can be made larger and the instruments on the telescopes can be easily changed to keep up with evolving scientific needs. If something breaks it can be fixed. So, considering the enormous additional expenses and challenges that go with putting telescopes in space, why do it?

If you look at a star through a telescope, on most nights you will see a blob, dancing around and flashing different colours, whereas you should be seeing a coloured dot. The moon and planets may look as though they are at the bottom of a stream.

The cause of this light show is the curse of ground-based astronomy, atmospheric turbulence. Sometimes, for short periods of time, the atmosphere settles down and we see fine details, but most of the time that turbulence is there.

When we add the time lost due to cloudy nights, our ground-based telescopes can only be used effectively for part of the possible observing time.

Putting a telescope into space adds years of lead-time to the project. If we cannot easily change or add instruments, we have to launch it with a set of instrument packages that will keep it scientifically valuable for decades. If critical systems cannot be fixed, they must have backups that can be switched in.

There must be as much operational flexibility as possible, in order to accommodate new experiments that could not be foreseen before the telescope was launched. In addition, everything has to work productively for a lifetime of decades. The instrument has to survive the vacuum, temperature extremes and radiation environment of space.

Finally, this highly complex instrument must fold up small to fit into the launch vehicle, survive the shaking and acceleration of being launched, and then, when in orbit, unfold, deploy the instruments, power up, and go to work.

Not many years ago, we would never have thought we would be able to probe the era in the early history of our universe where first structures started to form, or to look at the composition of the atmospheres of planets orbiting other stars.

Now, if we find a planet with significant amounts of oxygen and water vapour in its atmosphere we will be pretty certain we are not alone.

At a more human level, the images starting to come back from the JSWT underline what we have seen in the thousands obtained by the HST; our universe is a beautiful place.