Radio astronomy has its roots in early telecommunications

The birth of radio astronomy 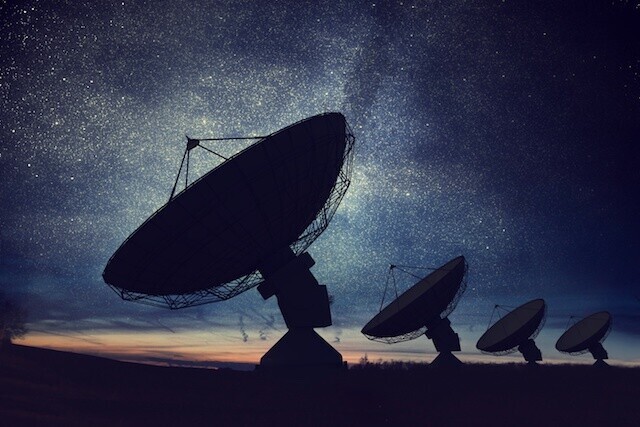 Back in the 1930s, radio communication was opening up the world.

For the first time it was becoming technically possible for a person in any country to communicate with anyone else on the planet. Companies were investing hugely in services to provide publicly available communications.

However, experience showed shortwave radio (using wavelengths between around 100 and 10 metres) was vulnerable to interference and occasional radio blackouts. Nobody was going to invest in, or use, an unreliable communications network. So companies started researching what affected their communications and to identify possible work-arounds.

One of the companies working on this new communications frontier was Bell, in New Jersey. To help it design the new system, it gave one of its engineers, Karl Jansky, the job of identifying sources of interference that could affect the new services. To do this, he built an antenna that was mounted on wheels from a Model T Ford car, so it could rotate, scanning the horizon to see where the various forms of interference were coming from.

He attached this antenna to a then state-of-the art radio receiver and started work.

Over the following months he identified the radio static from thunderstorms and other natural phenomena and the countless forms of manmade interference. Intriguingly, he found when this interference was absent, he could hear a steady hiss, which went away if he disconnected the antenna.

He scanned with the antenna and found the direction in which the hiss was strongest and found, to his surprise, during the day the interference peak moved from east to west. After months of work he concluded the culprit was the Milky Way, with the strongest signals coming from the direction of the constellation Sagittarius.

Jansky had discovered cosmic radio waves, that the Milky Way is a radio source and the strongest emissions come from the direction of the centre of our galaxy.

One would expect such a discovery would rock the astronomical community because, at the time, all astronomical observations were being made using optical telescopes. However, the attitude of the astronomers was that radio engineers should stick to playing with their radios and stop pretending to be scientists. Fortunately, Jansky's discovery attracted the attention of a radio amateur named Grote Reber.

Reber had successfully talked to radio amateurs in all the continents of the world and was looking for a new challenge. Jansky's discovery fitted the bill, and in his backyard in Wheaton, Illinois, Reber made the world's first radio telescope—a dish antenna almost 10 metres in diameter, made of wood with a reflective surface of galvanized steel plate.

After trying one receiver design after another, covering a wide range of wavelengths, he finally detected the emissions Jansky reported. However, Reber had a great advantage, his antenna was designed to nod up and down, so he went on to make the first radio map of the sky, clearly showing radio emissions from the Milky Way and that they were brightest in the direction of the centre of our galaxy.

Ironically, it was the Second World War that changed everything. Scientists and engineers were thrown together to develop new devices for the war effort, and in the process a mutual trust developed and the earlier radio astronomy results, and some new accidental discoveries made during the hostilities, established the new science.

When the war was over, the new technologies were used to make radio telescopes and radio astronomy was off and running.

• Before dawn, Saturn lies low in the south, with bright Jupiter to the left, then Mars, and finally

• The Moon will reach its last quarter on July 20.