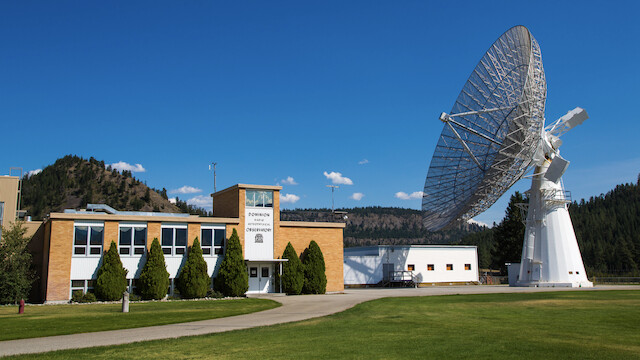 A new radio telescope project is under way at our observatory.

It is called CHORD (Canadian Hydrogen Observatory and Radio-transient Detector). Flashy acronyms are big business these days. It will consist of a closely packed cluster of 512 six-metre dishes. To a large extent, it will be a partner to the CHIME (Canadian Hydrogen Intensity Mapping Experiment) another large radio telescope on our site.

CHORD will be used to measure structure and expansion rates in the young universe, and also in the detection and study of fast radio bursts: very short pulses of radio energy from distant objects. These pulses are unpredictable and can come from anywhere in the sky. CHORD will have the very useful capability of imaging much of the sky over Dominion Radio Astrophysical Observatory (DRAO) in nearly real-time, with very high level of detail.

For much of our astronomical history, we believed that on the whole, things in the universe beyond the Solar System happen pretty slowly. Even supernovae—the explosions of ageing giant stars—and novae—other, smaller-scale stellar explosions—happen over days to weeks, to months.

Similarly, pulsars are objects which, once discovered, sit there in the sky at a known position, pulsing away. These objects are rotating neutron stars, which radiate beams of radio waves. When one of those beams sweeps past us, we see a flash of radio waves, just as we see a flash of light when the beam from a lighthouse passes us. However, now we are finding things that flash at us unpredictably from different parts of the sky. The only way we "see" them is if we happen to be looking in the right direction at the right time.

Fast radio bursts are almost certainly not the only transient and unpredictable things taking place in the universe, and the only way to really find out is to design completely new types of radio telescope.

Traditional radio telescopes, such as the 87-metre dish at Jodrell Bank in the UK, or the 26-metre dish at our observatory, can "see" the radio waves originating from a single, small patch of sky. The bigger the dish, the higher the sensitivity, the smaller that patch of sky it will see.

This is great for measuring known sources precisely, but making a radio image requires patiently scanning the dish across the area of interest, recording the radio brightness of each little patch of sky, and then combining all that data to make an image. If anything happens elsewhere in the sky, the big dish won't see it.

What is required is a large array of little dishes. The smaller the dish, the bigger the patch of sky it sees. The bigger the array, the higher the level of detail in that image will be. We can make detailed images of large areas of sky, in a single snapshot. We will know very quickly if something odd turns up.

Even though we have dreamed about such instruments for years, it is only now they are becoming technically feasible. For example, CHORD will use 512 six-metre dishes. We need to know how to mass-produce dishes in a way that keeps costs to a minimum. Each dish will need a complete radio receiver system. Fortunately, thanks largely to consumer electronics; these are getting far less expensive than they used to be.

Finally, 512 radio telescopes, all operating simultaneously will produce a tsunami of data. Now, again thanks to the increasing power and decreasing costs of digital electronics, we can build number crunchers that can handle it. DRAO has an established track record in the development of these machines.

A dream of mine has been to look at a big, high-resolution screen, and see the various radio objects and Milky Way as it passes overhead, just like when camping in the woods, we can lie on our backs and look at the stars. It won't be long now.

• Venus lies low in the dawn glow, and to its right, find Mars, Jupiter, and then Saturn.

• The Moon will be full on the June 13. It will be almost at its closest to Earth, so it will look a bit bigger in the sky.