Why are craters on the Moon round? 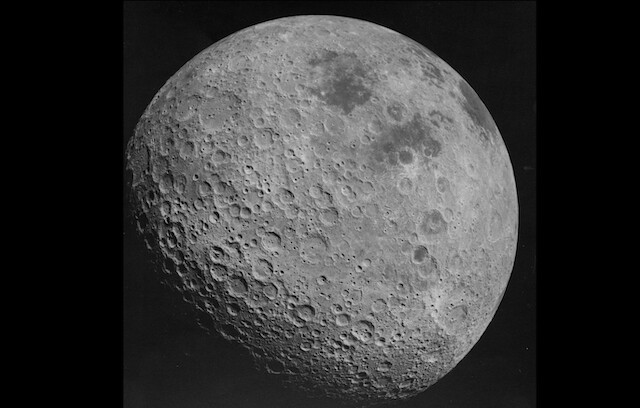 Some of the most important discoveries in science have come from people asking obvious questions—things so obvious nobody before bothered to ask.

Sir Issac Newton wondered why it was that apples and other things fall down. Olbers wondered why it is dark at night. Another deceptively simple question is why are the impact craters we see on the Moon, on Earth and elsewhere usually circular in shape?

A pitcher (in baseball) or bowler (in cricket) can launch balls at speeds of more than 150 kilometres an hour. This sounds fast, but compared with the speed of sound, which is around 1,200 kilometres an hour. This means, from a scientific point of view, the impact of that ball with the bat is a very slow process. The forces due to the impact move back through the ball at the speed of sound and the ball deforms smoothly. When the ball stops against the bat, it flicks back into shape and shoots away at high speed.

If nobody catches the ball and it hits soft ground, its very subsonic speed means there will be plenty of time for it to push the soil out of the way, making a hole, and for the ball to deform and to bounce. If the ball hits the ground almost vertically, it will make a round hole. On the other hand if it hits the ground obliquely it will make an elliptical mark or a gouge. However, if an object is moving somewhere between 10 and 100 times the speed of sound, the story is very different.

Let's look at a lab experiment. An aluminium sphere 25-mm in diameter is fired at a speed of 50km/s in the direction of a thick aluminium slab. At that speed it takes a millionth of a second to travel 25 mm. When it hits the slab, there is no time for slab material to move out of the way because the forces have not had time to act.

There is no time for the impact forces to get to the rear of the ball, so it all just piles into the collision point. The energy of the impact, some 29 million Joules, is converted almost entirely into heat, so that metal ball plus some of the slab material becomes a ball of aluminium vapour with a temperature of tens of even hundreds of thousands of degrees.

There is nothing containing this vapour and the internal pressure is enormous, so it explodes outwards in all directions. It is as if someone had just gently put a very powerful bomb on the surface and then detonated it. Since the explosion is due to the ball of hot material, not its kinetic impact, the hole it makes is always round, even when the impact is at an angle. In the experiment, the slab ended up with a deep, cup-shaped hole with a fringe of splashed metal, resembling a picture of a something dropping into water.

A shock wave went into the slab, and blew a chunk off the other side.

The craters we see on the Earth, the Moon and other objects in the Solar System are almost always circular because of the high impact speed.

A ball of vaporized material under enormous pressure is formed, which then explodes in all directions. The shock wave pushes the ground downwards. When the shock wave has gone, the ground bounces back, forming a peak in the middle of the crater. Most craters have one of these central peaks.

Thinking of the violence of that aluminium ball experiment, the energy release from the impact of an asteroid, say 10 kilometres in diameter, is hard to take in.

Some impacts on the Moon have splashed material out over huge distances. The crater Tycho is a really obvious example. There are streaks of material spreading out radially from the crater for hundreds of kilometres across the Moon's surface.

Get out the telescope or binoculars and have a look at the Moon. Then remember, our world has been bombarded just as heavily.

• Mercury lurks low in the dawn glow, with Venus to its right. Then, further to the right lie Mars, Jupiter, and then Saturn.

• The Moon will be new on June 28, and will reach its first quarter on June 6.