A radio stethoscope on the Sun 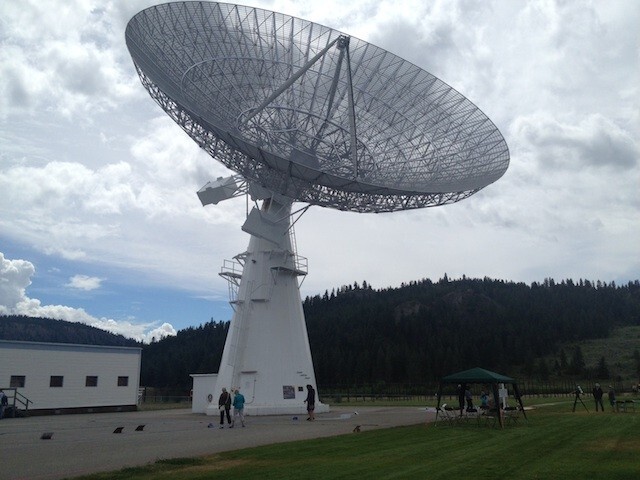 Three times a day, a measurement is transmitted from the National Research Council's Dominion Radio Astrophysical Observatory to a list of recipients around the world. Some use it directly. Others archive it and make it available on their websites, along with other data.

The measurements are made using two small radio telescopes, referred to as "flux monitors.” The data consists of measurements of the intensity of solar radio emission at a wavelength at 10.7cm. It is used by those involved in activities where, one way or another, they are affected by what the Sun is up to. These include communications services, space mission managers and various infrastructural services.

The service has its roots in the Second World War. In 1942, anti-aircraft radars, which were sweeping the sky over Britain searching for raiders, suddenly became unusable. Huge signals swamped any potential echoes. The display screens, which should have shown radar echoes, were filled with random dots and speckles. This stuff is now referred to as "snow.” The radars were being jammed.

The first fear was that Britain's antiaircraft defences were being affected by some secret weapon. Then, one of the engineers shut off the transmitter on one of the radars and waved the antenna around while looking at the display screen. Those jamming signals were coming from the Sun.

It was a relief to know that no secret weapon was involved, but since every time the Sun did whatever it was doing air defences were degraded, information about solar "attacks" was kept secret until after the war.

During that same war, warships at sea used their radar to sweep the horizon for any possible enemy ships. The operators soon noticed that when the radar antenna was pointed at the rising or setting Sun, any echoes from that direction were swamped by the same sort of "snow.” Because this phenomenon could be used by potential attackers, it too was kept as quiet as possible.

The Second World War was a high-tech war. It saw an explosion in the use of radar systems and advanced communication devices, along with efforts in making equipment to jam or spoof the enemy's radar and communication devices. When the war ended there were piles of advanced electronics that were no longer needed.

Naturally occurring radio emissions from the Milky Way were discovered in the 1930s, launching the embryo science of radio astronomy. The availability of unwanted military antennas and receiving systems provided a gold mine for making radio telescopes.

During the war, the National Research Council was a centre for the development of radar systems. After hostilities ended, the NRC scientists used bits of those radar systems to make Canada's first radio telescope. They pointed the instrument at various objects in the sky but the only thing they could detect was the Sun. So, they decided to accurately measure these solar radio emissions and how they varied.

Early in the war, Britain shared its military secrets with the U.S. and Canada. They included the resonant cavity magnetron. That device could generate high transmitter powers at centimetre wavelengths. It was particularly needed for airborne radar systems—short wavelengths mean smaller antennas can be used.

It is hard to accommodate large antennas on planes. The magnetrons operated at a wavelength of around 10.7 cm, so the radars did too and so did the NRC's radio telescope.

It turned out that measurements of solar radio emissions at this wavelength were a good indicator of the whole range of solar activity, Which is why this service has continued to the present day.

• Venus is low in the dawn glow. To its right, lies Mars and Jupiter, close together, and then Saturn.

• The Moon will reach First Quarter on the 7th, and be Full on June 14.