Second rock from the Sun 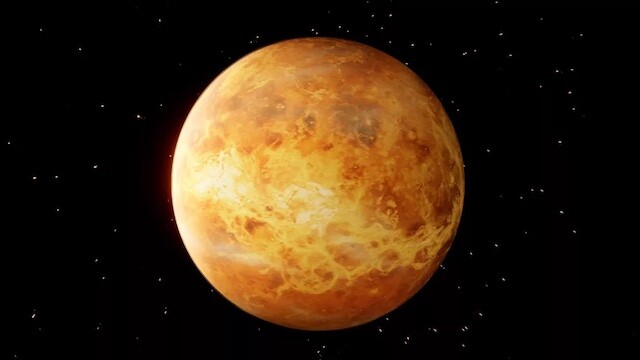 Photo: Space.com
Venus is the second planet from the Sun and very hot.

One of the demonstrations done for public tours of the (National Research Council's Dominion Radio Astrophysical) observatory (in Penticton) involves a small radio telescope.

This can be pointed at visitors to demonstrate that everything in the universe with a temperature, including people, gives off radio waves. We can use these radio emissions to measure the temperature of a distant object, such as the Moon, or Mars.

One thing that makes these radio measurements of temperature really useful is that they are unaffected by clouds. This made it possible for radio telescopes to produce a final answer to a question that had puzzled radio astronomers for a long time; how hot is Venus?

The sight of the bright spark of Venus against that magical blue we get in the sky after sunset or before sunrise is one of the most beautiful sights in nature.

This is even more so when Venus shares the sky with a crescent moon. It is probably the beauty of the planet in the sky that led to it being named after the goddess of love, and of course called the "Morning Star", when it rises before the Sun and the "Evening Star", when it sets afterwards.

Venus is the second planet out from the Sun (we live on the third), which means as Venus moves around the Sun we see it successively left or right of the Sun: Evening Star and Morning Star respectively.

Despite Venus being an easy target for even small telescopes, it is a frustrating one, because its surface is always covered by a thick layer of cloud. It is this cloud that is responsible for the brightness of the planet in our skies, because it reflects about 65% of the sunlight hitting it. Compare that with our Earth's 37% or the Moon's mere 12%.

The amount of sunlight reflected by Venus is another reason why looking at the planet is difficult. The glare of the bright planet when viewed against a dark sky is very hard to deal with. Experienced observers do it against a twilit sky or even during daylight, making sure the telescope does not get pointed at the Sun. However, even under the best conditions one only sees subtle changes in the colours of the cloud layer: not ever a glimpse of the surface.

This led the imaginations of astronomers and science fiction writers to run riot. Some scientists concluded the clouds were water vapour and that they concealed a surface covered in steamy, swampy jungle, like the Earth some 300 to 350 million years ago, during the Carboniferous Period.

Edgar Rice Burroughs, along with other science fiction writers, populated that world with swashbuckling heroes and beautiful princesses, or nasty, aggressive aliens. Then the radio telescope came along to shatter all those illusions.

By the middle 1950s radio telescopes had become highly developed and in 1956, astronomers at the Naval Research Laboratory in Washington pointed their new 50-foot dish at Venus, to penetrate down through the clouds to measure the temperature of the planet's surface.

The result was a shock. The surface was hot enough to melt lead and tin. There were no prospects of steamy jungles, warriors or princesses or nasty aliens. This was a surprise.

If we assumed Venus's atmosphere was like Earth’s, then the increased amount of reflected sunlight would to some extent balance the planet being closer to the Sun, which is where the steamy jungle idea came from.

We learned more when the first spacecraft landed on Venus's surface and sent back a few minutes' worth of data before it fried. The planet has a thick, dense atmosphere. The pressure on the surface is about ninety times the pressure on our planet's surface, and that atmosphere is rich in carbon dioxide and other greenhouse gases.

The result is a candidate for most unpleasant planet in the Solar System.

It is not clear if we will ever bother to try walking on the surface of the "planet of love" any time soon, considering that nothing we landed there has lasted more than a few minutes.

• The Moon will reach it first quarter on May 8.