Setting up the telescope 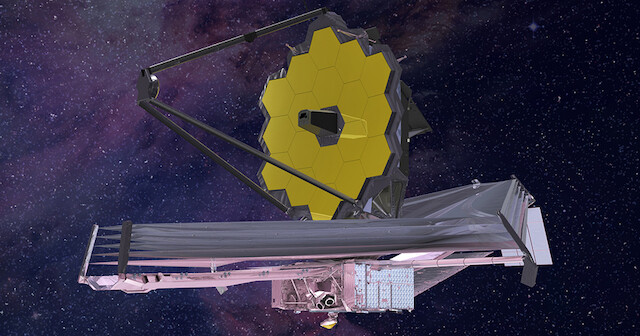 The James Webb Space Telescope is now at its parking place about 1.5 million kilometres from Earth, located so that the Earth is between it and the Sun.

Now it is being set up to start observing. This will take a while since it is a very complex task and if a mistake is made, and it isn't fixable by remote control, the repairs would require a longer servicing trip than any manned mission so far, and a far bigger launch vehicle than we have.

When we look at something through binoculars or a telescope, whether it something wild in the woods or something far off in space, the same process happens. A light collector, usually a convex lens, called the objective, captures light and brings it together to form an image, which we then observe through another lens, called the eyepiece. We can use a concave mirror to catch the light and form the image.

In this case the light is reflected back in the direction it came, forming the image in front of the mirror. Big, concave mirrors are usually chosen for large telescopes because large, convex lenses are very heavy and can only be supported around the edges, because the light has to go through them. Mirrors can be fully supported from behind. Moreover large mirrors or lenses are generally very heavy.

Since the mirror goes at the bottom of the telescope, the heavy weight is low down. It does not have to be supported high in the air.

Whether we are using lenses or mirrors, they have to be shaped with great precision. Errors in the shape of that lens or mirror must be far smaller than the wavelength of light, which is less than a millionth of a metre. This is precision engineering and it is amazing we can do it at all. It is even more amazing that amateur telescope makers have been achieving this for centuries.

The main way to ensure the lens or mirror maintains its accuracy is to make it all from one piece of material. Then we just need to ensure that it is stiff enough to stay in shape and is not exposed to temperature variations large enough to make it change shape. This is an area where mirrors come into their own; we can make the support structure as strong as we like and even add computer controlled actuators to keep the mirror in shape.

The single-piece mirror design was used in the Hubble Space Telescope (HST), which is equipped with a 2.4 metre diameter mirror. This easily fitted into the cargo bay on the Space Shuttle so this telescope was intended to be launched in a "ready to go" condition.

The 6.5 metre mirror on the James Webb Space Telescope (JWST) was another issue entirely. The mirror had to be this large (larger would have been even better) in order to meet its intended project requirements. However no available launch vehicles can handle objects with such diameters. There was no alternative to folding the instrument up and the unfolding it when on station in space.

The concave mirror was made in 18 hexagonal segments. Each segment was precisely manufactured. However, all those segments had to be attached to a folding structure that would withstand the noise and vibration of launch and then unfold so that all those segments would act together as a single, big mirror. This meant unfolding into a surface accurate to better than a millionth of a metre. The process has begun.

Since each hexagon is part of the same concave mirror, each one can make an image on its own. The roughly set up telescope was pointed at a bright star, and each hexagon projected a star image into the camera, so the image shows eighteen star images - just bright dots. The procedure now is to adjust each panel until all those dots combine to become one much sharper and brighter dot. This will be done slowly and very carefully.

There are a few months of work to go yet. We just have to be patient for a bit longer.

• Venus is conspicuous in the southeast before dawn, with Mars and Mercury low in the glow.

• The Moon will reach its last quarter on Feb. 23.