Cosmic 'bubbles' are just some of what fills 'empty' space 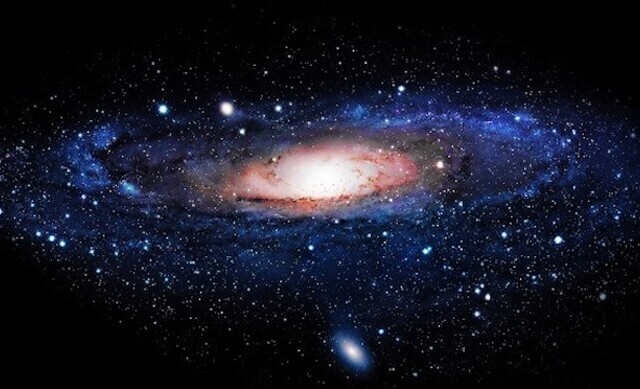 Our Solar System is currently moving through a cosmic bubble.

This void in space is about 1,000 light years wide. (A light year is the distance light travels in a year—just under 10 trillion kilometres). And we are close to the middle.

Its existence is nothing to do with us. We just happen to be moving through it. Blowing this bubble started around 14 million years ago. It is still growing.

Space is not empty. Along with stars and planets, there is a huge amount of gas and dust. The material is the raw material from which new stars and worlds are made and it is also where the remains of dead stars and planets end up.

What's in it and what it is doing tells us a lot about the past and gives us an idea of what might be coming.

Stars form from the collapse of a cosmic gas and dust cloud. The star’s birth happens in the densest parts of the clouds, where we cannot see with our optical telescopes. However, over the last decade or two, infrared and radio telescopes have been developed which can see into the clouds and image the forming star and planetary system. However, newly born stars do not stay hidden.

When the star turns on and starts to shine, its heat and its version of the solar wind blows all more finely-grained cloud material away. When the bubble bursts out of the cloud, we get to see the newborn star with our optical telescopes.

Like other stars, the Sun is continuously blowing out a wind of material in all directions. This "solar wind" blows out through the Solar System, pushing back the dust and cloud in interstellar space, forming our own local bubble.

The two Voyager spacecraft, launched in 1977 to explore the outer Solar System, have now left our solar wind bubble and are now out there inside that big, 1,000-light-year bubble. All stars have winds, but some stars surround themselves with bigger bubbles.

The very biggest bubbles are formed at the ends of the lives of giant stars. When these stars run short on fuel, they collapse and then explode, sending debris in all directions at thousands of kilometres a second. This meets the cosmic dust cloud, compressing it and pushing it outwards, and generating huge shock waves.

We find the bubble-shaped remains of these "supernova" explosions all over the sky. They are often hard to see or invisible through optical telescopes but they stand out well at radio wavelengths.

Some time ago, our observatory conducted a massive sky survey, known as the "Canadian Galactic Plane Survey". A mural of the survey's radio image of the sky (the sky as it would look if we could see radio waves) is on the wall in the foyer.

There are many supernova bubbles. There are also many regions where new stars are being born.

The bubble we are moving through is believed to be the result of multiple supernova explosions. This is not hugely unusual.

Stars are often born in groups, or clusters. In some cases the siblings disperse and go their own way. In other cases they stick together. Since they were all born at the same time, they age together, so we might expect that at some point there would be multiple explosions as ageing stars run out of fuel together.

The bubbles formed by exploding old stars can trigger the birth of new stars. When the shock front of an expanding bubble hits dense clouds, it destabilizes them, causing some of them to collapse, forming new stars and planets.

We see this happening on the skin of our bubble. One generation of stars begets the next.

It was not that long ago when the space between the stars was called "empty". Now we know it’s nothing like empty, and what is going on there is one of the most fascinating things in nature.

• Venus and Mars lie low in the dawn twilight.