Cosmics explosions: From solar flares to the Big Bang 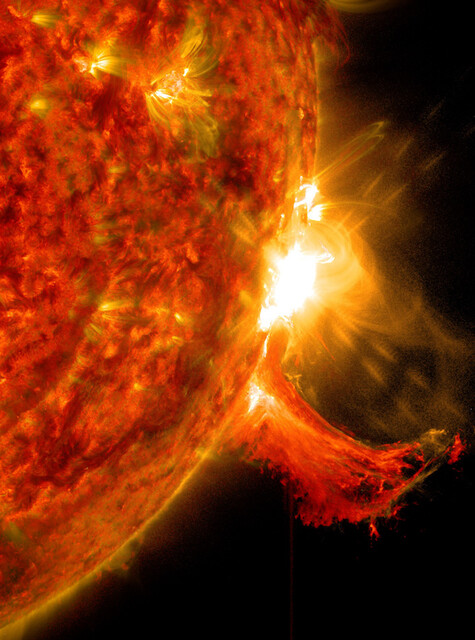 There are places in the universe where colossal amounts of energy are stored.

Most of the time, it is slowly released non-catastrophically, but on some occasions that is not possible and it is released explosively. Examples range from solar flares to the birth of the universe: the Big Bang.

Solar flares are the biggest explosions that occur in our Solar System. They are the result of magnetic loops, loaded with plasma, becoming so stretched, twisted or compressed the only way to relax them is in an explosion.

The loops we see in the solar atmosphere are firmly anchored at the "surface,” the photosphere. The stress buildup is due to the loop's anchor points moving around and new loops coming up and crowding against it.

When we stress a plasma with a magnetic field in it, electric currents start to flow. When the currents get too big for the plasma to carry, the loop can become unstable and explode. The energy of tens of millions of hydrogen bombs is released at the same time, producing pulses of X-rays, beams of high-energy particles, and chunks of solar material ejected at thousands of kilometres per second.

Moving up the energy scale, we come to the nova (plural is novae). For centuries astronomers noticed the appearance in the sky of new stars, where nothing was visible before, so they called them new stars—novae. A new star would shine for a while, maybe varying in brightness and then fade from view. The most accepted explanation for these involves two stars, maybe born together, where one is more massive than the other. They orbit around each other fairly closely.

The larger star shines brighter and burns its fuel so quickly that it starts to run out while its partner is still shining happily. The ageing star expands into a red giant, then shots off its outer layers and ends up as a white dwarf, around the size of the Earth, with no fuel left and so compressed that a teaspoonful of its material weighs in at a few tonnes.

Eventually this accumulation, which still contains a lot of hydrogen fuel, goes “critical" and explodes. This produces the nova we see in the sky. The pair of stars may be wrecked by the explosion. If they survive, the whole buildup process may start again, building up to another explosion, years or decades later.

The next one up the energy ladder is the supernova. In this case, an ageing giant star runs low on fuel, collapses and then explodes, for days or weeks shining brighter than all the billions of other stars in its galaxy combined.

From here we enter the regime of the truly high-energy universe, the realm of colliding neutron stars (the collapsed cores of really massive stars) or black holes. The amounts of energy released here can be so large the events can be seen from almost anywhere in the observable universe.

The Big Bang is the least understood explosion of the lot.

All of the explosions discussed earlier can be interpreted in terms of the physics knowledge we have. However, the conditions during the first few millionths of a second of the Big Bang were so extreme they are beyond our comprehension.

This may well remain the case, but what happened after those first few microseconds will keep researchers busy for a long time to come.

• Mars lies low in the dawn twilight, with Venus hiding lower in the glow.

• The Moon will reach its last quarter on Jan. 25.