The search for rogue planets in outer space 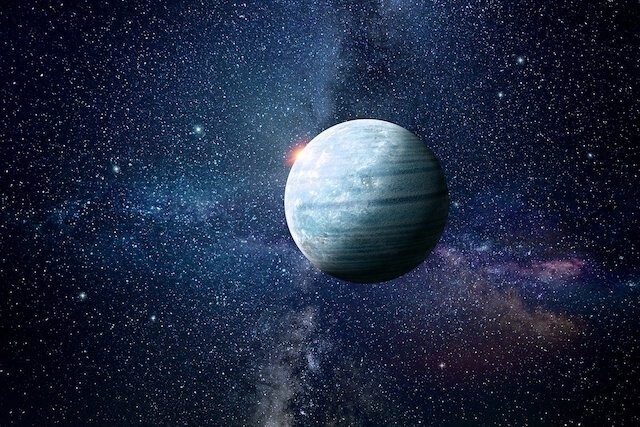 Imagine a world upon which the Sun has not shone for millions or billions of years, or maybe ever.

It is wandering the spaces between the stars and the only light is distant starlight. It is cold, a few degrees above absolute zero: the temperature at which everything stops. Most gases are frozen solid. There could be a thin atmosphere of helium, the gas with the lowest boiling point. Any oxygen or water, key life-giving substances on our world would be permanently frozen rock minerals on this one.

If life were possible at all on such a planet, it would not be life as we know it. So far, telescopic surveys have found more than a hundred of these "rogue planets". There could be a lot more of them, because they are very faint and hard to spot against a black sky.

This raises a big question. If planets form along with stars, how can they come to be wandering the galaxy alone?

Not that long ago, the only planetary system we had to study was ours: the Solar System. Moving outward from the Sun, we first encounter four rocky worlds: Mercury, Venus, Earth and Mars. Then there is a band of rubble—the asteroids—that never got to form a planet.

Next we encounter four large worlds that are mostly gas, and called, logically, "gas giants”—Jupiter, Saturn, Uranus and Neptune. Beyond them there is a belt of thousands or millions of lumps of stuff left over from the birth of the Solar System.

We had a theory that explained this beautifully. A cloud of cosmic gas and dust collapsed, forming a rotating disc. A randomly moving cloud will have an average movement in some direction, and a degree of rotation, so collapsing into rotating discs is expected, and our telescopes are coming up with numerous examples.

All planets started off with the same recipe. However, the closest planets had a lot of their gases driven off by the heat of the newborn star. The outer planets were far enough away to hang onto their gas.

The asteroid belt came about because the gravitational tugging by the giant planet Jupiter stopped the material coalescing into a planet. It is all rather neat, and makes great sense.

Then we started observing systems of planets orbiting other stars. It turned out that most of them are unlike our system. There are no signs of the nice rocky to gas giant progression we see in our Solar System. There are gas giants orbiting closer to their stars than should be the case, and rocky planets scattered among the gas giants.

Now it looks as though once the disc has collapsed to form a star and planets, there is a period of instability with planets changing orbits in all sorts of strange ways. During this planetary billiards phase, close encounters between two planets could make one move in closer to its star, and the other thrown out of its system.

Another way we could get a rogue planet is through a planetary system having another star pass close by. The gravitational perturbations due to this stellar visitor could send planets - hopefully uninhabited ones - flying off in all directions.

We can estimate the mass of an object in space by measuring the gravitational effects it has on nearby bodies. However, rogue planets are, as far as we can see, completely isolated, and anyway, getting any sort of measurement of a faint dot against a black background is very hard.

The upper limit is around thirteen times the mass of Jupiter. Anything more massive will become a star.

It is hard to tell when we will get a close look at a rogue planet. Over the last few years two bodies we might describe as rogue asteroids passed through our Solar System.

It would be wonderful to have a close look at one, and better still to get a rock or soil sample from one.