Powerful new eye in the sky 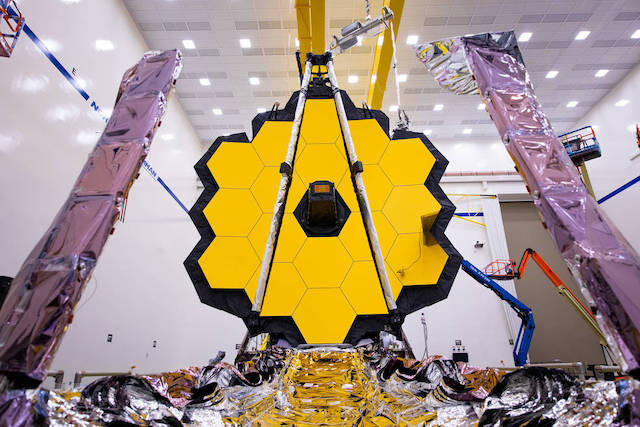 Photo: Contributed
The James Webb Space Telescope was scheduled to be sent into space today.

As I write this column, final preparations are underway for the launch of the James Webb Space Telescope (JWST), which is planned for launch, Christmas Eve (today).

This telescope is an international project; the participants include the American Space Agency (NASA), the European Space Agency (ESA) and the Canadian Space Agency (CSA). It has been described as the successor to the highly successful Hubble Space Telescope (HST). This project certainly builds on what has been learned with the HST, but the science objectives for the new telescope are substantially different. Considering the expense and planning that need to go into successfully building and deploying a telescope in space, why do we do it?

If you have ever done backyard astronomy you will know a big part of the answer. Turbulent motions in the atmosphere cause the images to dance and blur, with just bare moments where details flash into view and then vanish again. That is assuming you can see the stars at all; cloudy days make optical telescopes useless. In addition, no matter what the weather is like, you cannot do much observing during the hours of daylight. Putting telescopes above the atmosphere removes all those atmospheric problems. In addition, providing the celestial objects of interest are not hidden by the Earth or Moon, and don't lie too close to the Sun, 24 hours a day observing is possible.

There is another reason for putting telescopes in space. The emissions coming from other objects in the universe range from long-wavelength radio waves to extremely short-wavelength gamma rays. The atmosphere is transparent to visible light and part of the radio wavelength spectrum. For the rest of the electromagnetic spectrum it is partially or even totally opaque. There is meaningful information in these emissions that don't get to the ground, so we have to observe them from space.

The JWST is capable of observing at infrared wavelengths, which are blocked by the atmosphere. It will a useful instrument for a wide range of projects. Here are a few:

• Investigating the end of the universe's “Dark Age.” The universe started as something very hot and very dense. Eventually it cooled to the point where atoms could form. At this point it became dark, because nothing was hot enough to produce light. Then around 13.5 billion years ago, the first stars formed, lighting up the universe and ending the Dark Age. It is at that point that the universe started to look like the one we live in today.

• What were the very first galaxies like? The first galaxies formed around the time the first stars began to come together. At what point did galaxies become like the ones we see now?

• When the first stars formed, the elements needed to make planets and life forms did not exist. These are made as waste products during energy production in stars. After a few generations of stars had passed, there were enough of these waste products to make planets. This formation happens inside collapsing clouds of gas and dust. The JWST should be able to penetrate these clouds so we can see at which point in the universe's history planets, and possibly life, could have begun.

This new telescope will be a powerful tool for looking at the atmospheres of planets orbiting other stars. There are certain elements that indicate the presence of life, such as the oxygen in our world's atmosphere. Knowing, rather than just believing, we are not alone will be one of the greatest discoveries in our history.

• After sunset, Venus lies close to the southwest horizon, with Saturn to its left and then Jupiter.

May the JWST be just one of the good things happening in 2022. Merry Christmas and happy New Year.