Plenty of presents suitable for astronomers out there 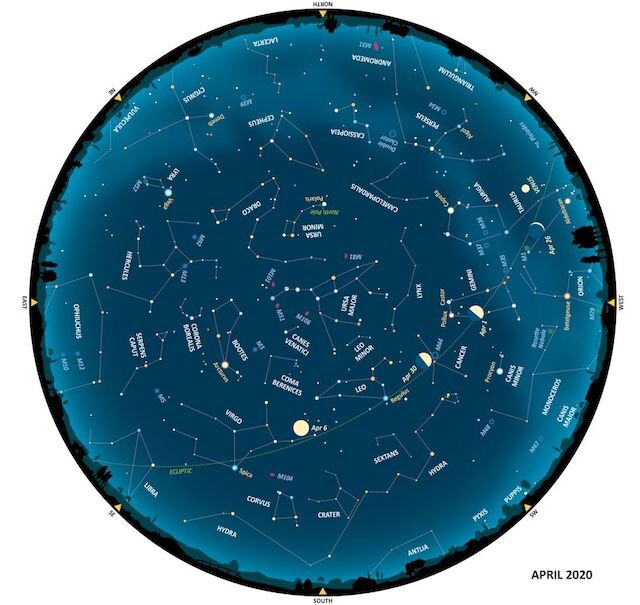 Photo: All About Space/Future
An example of a star chart from April 2020 in the Northern Hemisphere.

There are many things other than telescopes or binoculars that the family astronomer might want to find in their stockings. The choice is huge.

Here are a few suggestions. It is by no means all-inclusive. Hopefully there will also be some helpful hints coming from the family astronomer.

A good star atlas is always a good idea, because it is easier to work precisely over a paper map on a flat surface than with a computer screen. Norton's Star Atlas is a perennial favourite. I use one of those for general purposes and a Wil Tirion Star Atlas for more serious things. This article, available on the web, should make the choice a bit easier: "https://astronomy.com/observing/get-to-know-the-night-sky/2014/04/choose-a-star-atlas-thats-right-for-you". It's a long link but easy to type.

In a world where there are numerous apps and software packages to tell us what is in the sky at different times, a planisphere is still a nice thing to have. They have the advantage of not wrecking your night vision, don't need batteries, don't mind being dropped into water, mud, snow or slush, and maybe being trodden on in the dark.

They consist of two plastic discs, riveted together in the middle so that one can be rotated over the other one. There is a window on the top disc and an "hours of the day" scale around the edge. The lower disc has a star map printed on it and a calendar around the edge. Set the local time against the date and the windows shows what stars and constellations should be in the sky. Make sure you buy the one for your latitude.

There is a wealth of software out there, covering all conceivable astronomical purposes. If the need is just to know what is in the sky anywhere at any time, I find Stellarium very useful. It is also free.

Every observer should have a copy of the Observer's Handbook, produced annually by the Royal Astronomical Society of Canada. It lists what can be observed and when during the year, including information on special events such as eclipses. Included is a wealth of background information on astronomy, time and observing.

Astronomy magazines are an excellent way to keep up to date on what is happening in the world of space and astronomy. There are professional and amateur observations and images, information on what astronomical events are coming up, and reports on telescopes and other astronomical equipment.

When observing faint objects, it is important your eyes be dark-adapted. This is achieved by avoiding light. However, it might be necessary to check a star atlas or other material, or to retrieve something that has been dropped without accidentally treading on it. Red light does not degrade dark adaptation as much as white light does, so a special red flashlight would make a good present. Even more useful are red LED lights on a headband. These leave both hands free, which may be useful when setting up a telescope.

There are many pieces of equipment out there that would be useful to the family astronomer. My advice to potential recipients is to leave useful lists lying around, and remember to include where the item can be purchased, just in case.

•After sunset, Venus lies close to the southwest horizon, with Saturn to its left and then Jupiter. Venus shines brightest and Saturn the faintest.

• The Moon will reach first quarter on Dec. 10.