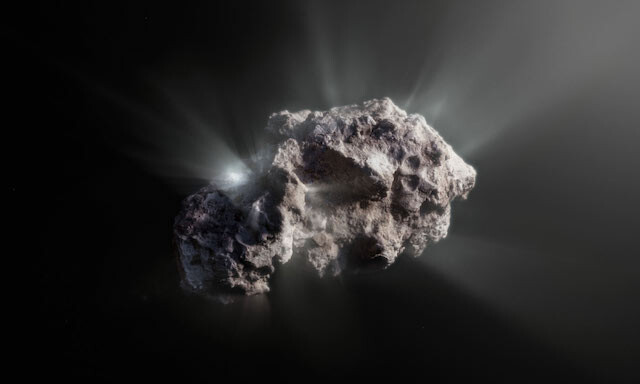 In 2017, an elongated rocky object came into the Solar System from interstellar space, flew past the Sun and planets and returned to the dark, cold space between the stars.

It is widely accepted that the object was an elongated asteroid. However, it was not possible to determine where exactly it had come from.

This year a second interstellar visitor has been detected, and this time we have a pretty good idea where it came from. This time round the visitor is a comet, a ball of ice, dust and gas a few kilometres in diameter. It was discovered by Gennady Borisov, an amateur astronomer living in the Crimea. The comet has been named Comet 2I/Borisov after its discoverer.

We see a few comets every year. These are local products, originating in the outer Solar System. However, measurements of the orbit of Comet 2I/Borisov showed it did not originate in the Solar System. It was moving far too quickly, about 177,000 kilometres an hour. To have so high a speed, the comet must have fallen toward the Sun from interstellar space. It would pass by the Sun and vanish again out among the stars. This time round there were enough precise measurements of the comet's position and speed for scientists to make a good calculated guess as to where our second known Solar System visitor came from.

Interstellar space is very empty, with nothing much to disturb the trajectories of objects moving between the stars. Therefore we can determine the direction of arrival and look back along that path to see where the object came from. In this case backtracking along the course of Comet 2I/Borisov takes us to the red dwarf star system Kruger 60, lying 13.15 light years away. In cosmic terms this is very close. Even so, the object took millions of years to get here. Kruger 60 is actually a double, consisting of two red dwarf stars, orbiting around each other at an average distance of about ten times the distance between the Earth and Sun. Their orbit around each other takes 44.7 years.

When it was closest to Kruger 60 the object was moving at only a few kilometres a second. If the comet had arrived at Kruger 60 from interstellar space, it would have accelerated to a high speed as it fell toward the star system, just as things falling towards the Sun accelerate. That low speed suggests that the comet was not visiting Kruger 60; that is where its journey started. It could have started its story as an icy remnant orbiting one of the stars, just like the ones orbiting in the outer Solar System. A close encounter with another could have sent one plummeting toward its star and the other out into interstellar space.

The chance of something being ejected from one star precisely in the direction of another star lying light years away is tiny, but it can happen. The fact that we have had two interstellar visitors in a few years suggests there must be a huge number of these interstellar wanderers out there, with almost all of them not heading for any star.

The frequency of interstellar visitors is interesting for another reason. There is a theory that the seeds of life get delivered from space. This theory, called "panspermia" proposes that the fundamental ingredients for life arrived on Earth from space maybe 3.8 billion years ago. Those seeds, probably complex organic molecules land on young planets, and if conditions are suitable, start to multiply and adapt to local conditions.

It would be nice to send a space probe to one of these visitors to get a close look and maybe a sample or two. However, intercepting an object moving through the Solar System at almost 180,000 km/hr, making observations and taking samples would be a tremendous challenge.

• Jupiter and Saturn rise around sunset.