Despite being 2.5 million light years away, we can see Andromeda 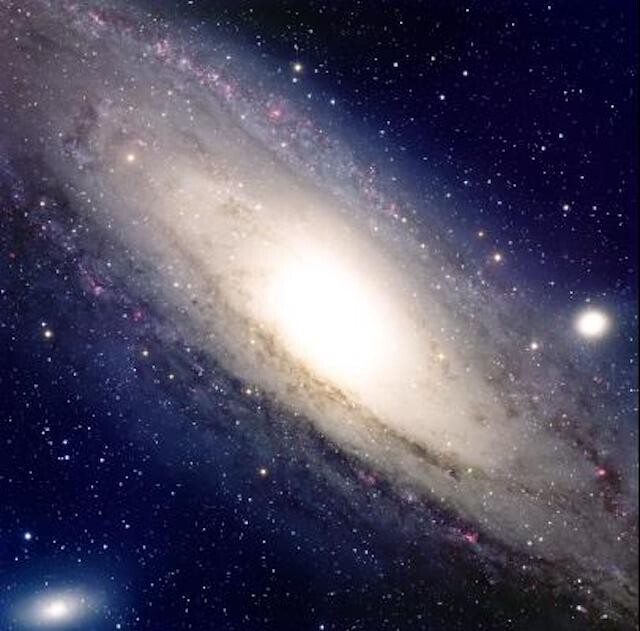 These evenings the Big Dipper is lurking low in the northern sky.

The two stars opposite the handle, named Dubhe and Merak, are known as the "pointers" because they point to the North Star, which is also known as the Pole Star. This star, named Polaris, is a moderately bright star about halfway up the northern sky, surrounded by much dimmer stars, so it is easy to spot.

Now go back to the Big Dipper, and imagine a line from the star marking the end of the handle farthest from the bowl to the Pole Star. Keep going and you will find yourself at a "W-shaped" group of stars. This is the main part of the constellation Cassiopeia. Notice that one of the V's making up the W is shallower than the other. Now follow the line from the end of the shallower V to its bottom and keep going for about five V-depths.

If the sky is clear and dark you should see a fuzzy blob. This is the most distant thing you will see with your unaided eyes. You are seeing the central part of the Andromeda Galaxy, at a distance of about 2.5 million light years. This is the closest spiral galaxy to us. The whole thing spans about six times more sky than does the full Moon but only the nucleus is bright enough to see with unaided eyes. If the sky is not clear or dark enough, binoculars should make it easy to find. Through a large telescope the galaxy is really spectacular. You'll notice the core region is a more or less uniform yellowish glow, whereas the spiral arms are mixtures of stars, glowing clouds and streaks of darker dust and gas.

Notice also those little pinkish, glowing spots. These are places where new stars are being born. Young stars radiate a lot of ultraviolet light, which makes the hydrogen in the surrounding cloud glow red. The parts of a spiral galaxy show up better when we see the galaxy face on, as with Messier 51.

It is likely that galaxies start off in a way similar to how stars and planetary systems form. A big cloud of gas and dust collapses into a spinning disc, which then gradually shrinks. In the formation of a new planetary system, the core of the disc collapses to form a star.

In the case of the immensely larger cloud of stuff forming a galaxy, stars start to form in the disc core. This continues until more or less all of the gas and dust have been used up. Then, at some point the gas and dust in the disc become sufficiently concentrated for star formation to start. So in the cores of spiral galaxies we see an ageing population of stars and no young ones, surrounded by a disc loaded with young stars. The sun is located well out in the disc of our galaxy, where star formation is vigorously going on all round us. A selection of star forming regions can be found on the Wikipedia website.

Elliptical galaxies resemble the cores of spiral galaxies, and could be spirals that long ago lost their outer discs in collisions or some other process. Whatever is responsible, it happens quite often cosmically speaking, because there are many of them. Irregular galaxies are randomly shaped clouds of gas, dust and stars. Two are visible from the Southern Hemisphere—the Large and Small Magellanic Clouds.

On occasions galaxies collide, just as ours will eventually collide with the Andromeda Galaxy.

Simulations of such collisions show bits of galaxy flying in all directions. However, these events are not as catastrophic as they might sound.

Galaxies are mostly empty space, and in most collisions, the biggest impact is a stirring up of the gas and dust clouds, triggering waves of new star formation.

• Venus lies low in the sunset glow. At the same time Jupiter and Saturn are rising.

• The Moon reaches last quarter on the Sept. 28.