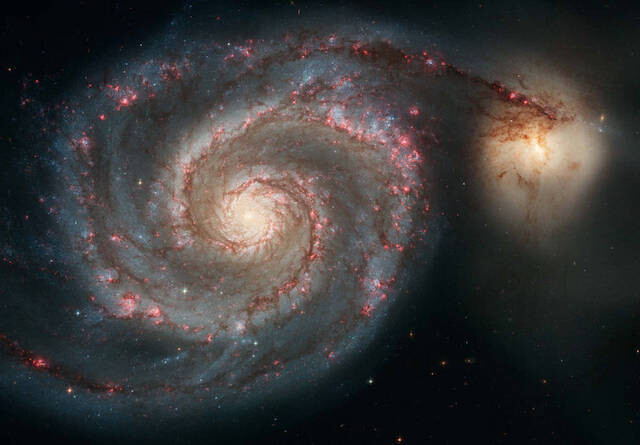 NASA has just published a very intriguing picture of the spiral galaxy Messier 51.

This spiral galaxy, which is similar to our galaxy, the Milky Way, is of particular interest because we see it face-on, so we can examine it in detail. Superimposed on the image is a map showing the galaxy's magnetic field. You can find this interesting observation at here. When we look at it, we get a very strong feeling that even though it is not possible, we have seen something like that before.

The image of the galaxy shows it to be threaded by fibres of magnetic field. In some cases the fibres are tidy, aligned along or almost along the spiral arms. In other places they are much more chaotic. The untidy magnetic field lines indicate places where things are changing and rearranging. It is only recently we have come to appreciate the importance of magnetic fields in moulding galaxies and many other structures we see out there.

In addition to stars, dust and gas, space contains a lot of plasma—gas atoms that have been broken up by heat or ultraviolet light from stars. Plasma and magnetic fields really like each other and stick together almost inseparably, forming a sort of elastic, stretchy, twisty material. This is similar to storing energy by stretching or twisting a rubber band. If we stretch it too far it snaps, releasing that stored energy in a moment. The same applies to those magnetic fibres. Sometimes they manage to relax gently, becoming stable again. On other occasions the stress relief requires an explosion.

In those fibres of magnetic fields and plasma, stresses produce electric currents. There is a limit to the amount of current that can be carried by the plasma. If the currents become too large, catastrophic instabilities occur and the fibre explodes. In the huge plasma fibres in galaxies the explosions occur in very slow motion. There are places they happen a lot faster, although on a much smaller scale, such as in the Sun.

The Sun is a seething mass of magnetic fibres, these are constantly being rearranged, twisted, stretched and jammed together. The energy in one stressed fibre can be equivalent to tens of millions of hydrogen bombs. When the instability point is reached, that energy is released in seconds. Jets of high-energy particles are produced, along with high-energy radiation. A chunk of the fibre may be ejected into space at thousands of kilometres a second. These explosions are called solar flares.

For example, one particularly intriguing situation is what happens in the shrunken remnants of dead, giant stars, where the explosion following the star's running out of fuel compresses its core down to a diameter of a few kilometres. The result is a small, very dense object with an extremely strong magnetic field. These stars are almost always surrounded by plasma. The magnetic field lines reach out from the star to the plasma and embed themselves in it, forming fibres filled with plasma. Since the star is usually rotating faster than the plasma is orbiting it, the fibres get pulled into a tighter and tighter spiral, like a wound clock spring. The electric currents build up, until the instabilities develop and there is an explosion, releasing a short, absolutely enormous pulse of energy. The radio waves generated in this pulse are so strong they can be detected at distances of millions or even billions of light years.

That beautiful image of Messier 51 looks like a piece of art, not a site of incredibly violent events. If we could go out there and make a similar image of our galaxy, it would look more or less the same.

• The Moon will reach first quarter on Sept.13