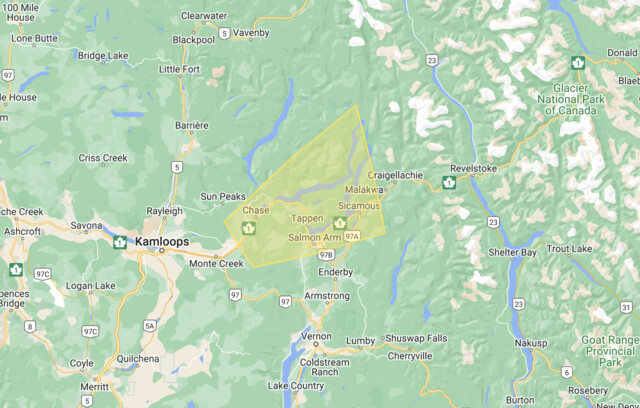 Photo: Alertable.ca
A severe thunderstorm warning was issued on Monday afternoon for the Shuswap region.

Environment Canada has ended a severe thunderstorm watch for the Shuswap region.

A severe thunderstorm warning has been issued for the Shuswap region.

The alert was made just before 3:30 p.m. on Monday, hours after Environment Canada put in place a severe thunderstorm watch for a wide swath of the Thompson-Okanagan.

The area covered by the warning includes Chase, Salmon Arm and Sicamous.

Another severe thunderstorm watch has been issued for the Okanagan, Thompson and Shuswap regions.

Environment Canada issued the watch Monday morning as heavy rains are anticipated – with as much as 15 millimetres falling in a single hour.

The storm watch is in effect for the North, Central and South Okanagan, eastern parts of the North Thompson, Monte Creek, Pritchard, northeast portions of the Nicola Valley, Monte Lake, Westwold, and Shuswap.

"Conditions are favourable for the the development of severe thunderstorms today," Environment Canada says.

"Intense lightning is likely with any thunderstorm that develops. Heavy downpours can cause flash floods and water pooling on roads."

This comes as the River Forecast Centre has issued another flood watch for Mission Creek in Kelowna.

The creek level increased rapidly overnight and will continue to rise through Tuesday, depending on the amount of additional rainfall.

High streamflow advisories remain in place for many other rivers and streams across southern and southeastern B.C. after as much as 35 millimetres of rain fell over the last 24 hours.

A flood watch has been replaced for the upper Fraser River with a high streamflow advisory as conditions around Prince George ease, but watches are still posted for the Nechako, Thompson and South Thompson rivers, while a flood warning is still up for the Quesnel River east of Williams Lake.