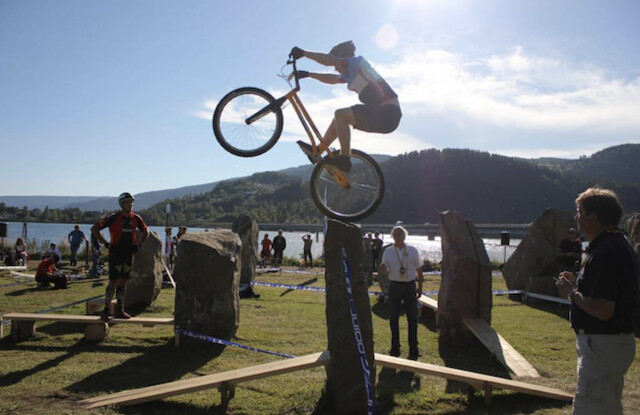 Trials cycling stars will show off their skills in Salmon Arm this weekend.

Bicycle trick riders Jeff Anderson and Steve Dickin of The Trials Stars will take to the streets of the Shuswap community during the Salty Dog Street Festival on Saturday.

Bike trials is an individual sport that incorporates use of a special bicycle which the rider must manoeuvre and balance to ride specially designed artificial or natural obstacles.

As a team, each partner works together to explain the move the other is making for the audience, so they understand the objectives moving through sections with as little physical contact with the ground as possible, hence obtaining minimum penalty points in competition.

Both Anderson and Dickin have been performing trials shows since 2004.

They have performed countless demos, opening for the band Swollen Members, CEOs and motocross teams. They have also competed for Canada in China, Australia, New Zealand and Italy.

The show features the two riders, hopping to and from boxes anywhere from four to eight feet high, balancing on skinny beams and even using their trailer as a prop.

Putting on the shows has its dangers, but the two riders have gone reasonably unscathed in their years of riding.

“We haven’t had anything really serious, mostly sprains and cuts on the shins, but no broken bones,” says Dickin.

There will be two shows on Saturday, at 11 a.m. and 2 p.m. Young riders will also have a chance to win a lunch meet-and-greet with the stars.

Kids can enter a colouring contest for a chance to win a prize pack and lunch with the team. Pick up the colouring page at Ian Gray’s Salmon Arm GM, Skookum Cycle or download it from the Salty Dog Facebook page.

For more information on all events and activities at the Salty Dog weekend, click here.