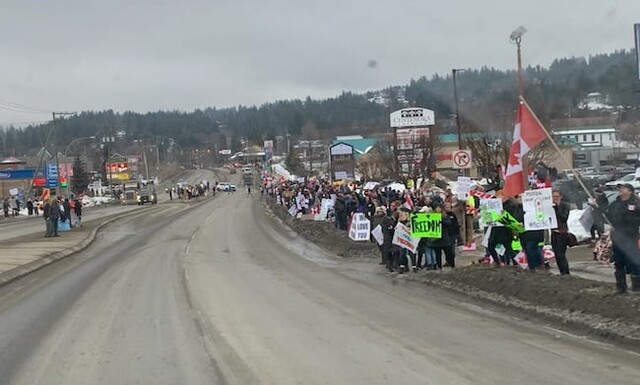 Salmon Arm RCMP are thanking protesters for keeping things peaceful on Sunday as vehicles rolled through the city in support of the "Freedom Convoy."

Staff Sgt. Scott West said police extend their thanks to the demonstrators, "who obeyed officers direction and demonstrated in a peaceful and lawful manner on Sunday afternoon."

An estimated 600 people took part in the protest on the Trans-Canada Highway at Highway 97B.

West says the protesters "were largely respectful of the officers."

They were asked to leave the median under the Motor Vehicle Act for safety reasons, and did so, relocating to the curb or the sidewalk.

"A comparatively smaller group of people were abusive to the officers and were verging on obstructing them in their duties," says West.

"They yelled at and taunted officers who were asking people to leave the centre median because the passing vehicles may cause was a safety risk for the demonstrators."

West added: "I think it It is important to thank quite a number of the demonstrators who respectfully relocated to the sidewalk area from the median, and stayed off the highway. Our detachment members would like to thank those people for being so respectful and safe."

"For us as police, we are there to preserve rights, and one of those rights is to lawful assembly – but we all have a common goal to make sure everyone is safe. In this case, the public, the motorists and the police personnel could all have been at risk at one point or another during this two to three-hour event due to the environment they were all in."