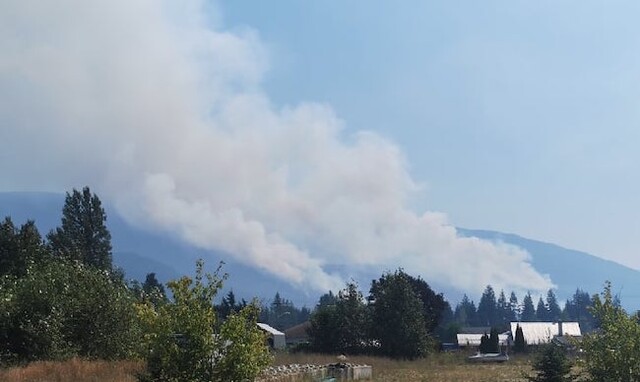 Wind gusts up to 35 kilometres per hour have pushed the Two Mile Road fire away from Sicamous.

The blaze, however, has doubled in size and is now estimated at 800 hectares. It remains out of control.

The BC Wildfire Service said crews are making progress holding the guard at the lower end of the fire.

BCWS iis assisting the Sicamous Fire Department and the Swansea Fire Department with 38 BCWS personnel and 15 fire department personnel on site. There are also multiple helicopters, air tankers and pieces of heavy equipment working to contain the fire.

The evacuation alert area for the Two Mile wildfire burning outside Sicamous has been extended to the south.

An evacuation alert was issued Wednesday evening by the Columbia Shuswap Regional District for Swansea Point on Mara Lake.

The alert area includes both sides of Highway 97A, north to the District of Sicamous municipal boundary.

Residents should prepare to leave and may receive limited notice due to changing conditions. 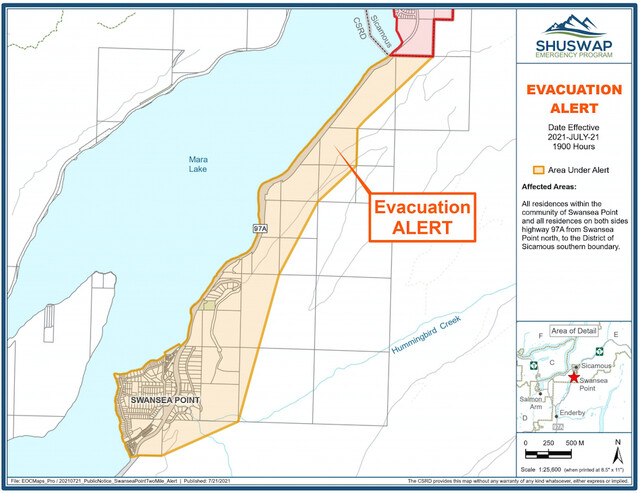 The Two Mile Road wildfire close to Sicamous has grown to 400 hectares in size, the BC Wildfire Service confirms.

There are 36 personnel on site fighting the fire.

A spokesperson for BCWS says helicopters and additional air support from skimmers and tankers has been working on the fire throughout the day.

"BC Wildfire is optimistic regarding the current conditions. The winds are favourable, and the fire is moving northeast and upslope, away from the community," the CSRD says.

There are no changes expected to evacuation orders and alerts for at least the next 24 hours, however.

BC Wildfire Service, District of Sicamous, Malakwa and Swansea Point firefighters are all fighting the blaze, which is 160 hectares in size and burning out of control.

Crews working on the scene through the night.

There is currently no risk to any properties in the Swansea Point area.

Highway 97A remains closed south of Sicamous near Mara. The Trans-Canada Highway is open.

Residents and any remaining visitors should be prepared for evacuation on short notice.

The Two Mile wildfire burning on the edge of Sicamous grew to 130 hectares in size overnight.

The BC Wildfire Service says it has 33 personnel responding to the blaze today, accompanied by 10 pieces of heavy equipment.

Crews are continuing to build guards around the fire to control the blaze.

There is no new information available yet this morning on the Two Mile wildfire burning on the outskirts of Sicamous.

The fire blew up late Tuesday morning, starting from a suspected vehicle incident on Highway 97A above Mara Lake, just south of Sicamous. The highway remains closed at the scene this morning.

The fire quickly ballooned to 60 hectares in size, prompting a tactical evacuation of homes in the area and an evacuation alert for most of Sicamous south of the Trans-Canada Highway.

The blaze was being fought by BC Wildfire Service Crews along with the Sicamous and Swansea Point fire departments.

There were multiple reports that boaters on the lake were interfering with helicopters' ability to bucket water and fight the fire.

The Royal Canadian Marine Search and Rescue Station - Shuswap has stationed a boat on Mara Lake to keep boaters from “coming out for a look,” and to provide a sufficient area for the helicopters to safely pick up water and deliver to this fire that is threatening Sicamous.

Approximately 1,000 residents were evacuated, including from the Eagle Valley Manor assisted living facility.

The evacuation order remains in place for all residences in the District of Sicamous to the south of Sherlock Road, Southeast of Cook Avenue, Gillis Avenue, Larch Avenue, east of the Sicamous Narrows and Mara Lake, and north of Sicamous Creek.

Castanet will have the latest from the scene today as more information becomes available.