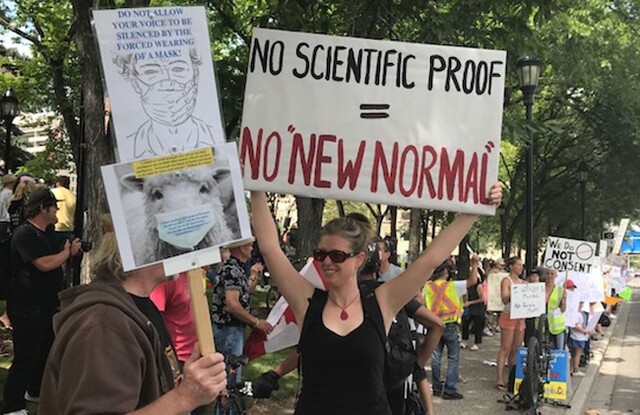 Photo: CTV News
Protest rally in Calgary over the summer.

The organizer of a weekend protest in Salmon Arm against pandemic health measures was issued a $2,000 ticket for hosting the event.

The protest was one of two large protest gatherings over the weekend in the community.

Staff Sgt. Scott West says RCMP officers sought to monitor and educate those in attendance who were not following safety measures set out by public health authorities.

"At these events, officers used their discretion in dealing with members of the crowd and informed people that this type of gathering was prohibited under the current public health order that is in place to combat the spread of COVID-19.

"In interactions with police it became evident that some people in the crowd were apparently unaware that the rules on gatherings prohibited a gathering that was this large at this time."

West says there were a number of "respectful and informative" interactions with some of the 75 people in attendance at the park.

"After speaking with the police at the scene, some left the area and there were no tickets served to the persons who attended the event."

However, police were approached by the event's organizer, and the officers "attempted to inform him of his legal jeopardy as an organizer. He was less than engaging, but still respectful and was served a violation ticket under the COVID Measures Act for organizing the event under Section 2 of the COVID-19 Related Measures Act."

West says both events were orderly and respectful.