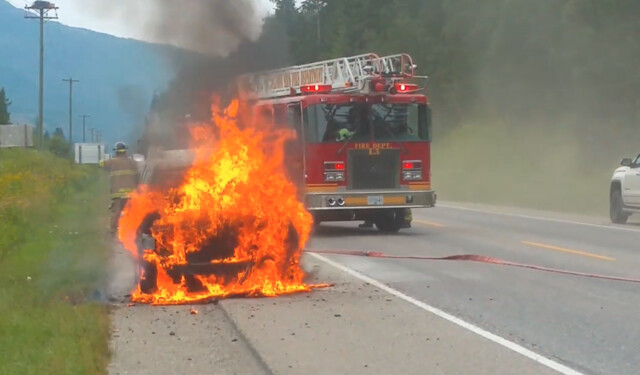 A spectacular fire was captured on video yesterday after a Jeep went up in flames outside of Salmon Arm.

The video, shared by MrHazardous on YouTube, starts off by showing flames pouring out of the grill and from around the hood. A man with a fire extinguisher sprays in through the grill and the fire slows for a bit, but doesn't go out.

After a while the flames begin to build again and smoke comes out of every gap in the vehicle.

The video then cuts to a while later with the flames once again well established, coming out of the headlights, grill and burning through the bottom of the engine. It cuts again and shows the Salmon Arm Fire Department arriving at the scene and attacking the fire, quickly putting it out.