The fire department was alerted to the fire just prior to 1 p.m.

Upon arrival, four boats were found fully involved in fire and a portion of the dock at Captain’s Cove Marina.

"Crews were delayed slightly by a passing train," says Shirley, "but were able to knock the fire down quickly."

He says staff at the marina were able to push the boat where the fire started away from the wharf to avoid the flames spreading further.

Preliminary investigations reveal the boat had just been refuelled and the following explosion is "consistent with a gas vapour explosion," said Shirley.

The boater on board suffered injuries in the blast and was taken to hospital by ambulance.

Shirley says it does not appear any fuel was spilled into Shuswap Lake, but fire crews put out containment booms just in case.

Both Interior Health and Environment Canada were notified of the incident.

Fire crews were on scene for about an hour and a half.

BC Emergency Health Services says one person was taken to hospital with non-life-threatening injuries in today's marina fire on Shuswap Lake.

Two paramedic crews were dispatched to the scene.

As the inferno sent black smoke towering over the lake, boaters watched from the safety of the water and swimmers from the nearby beach as several boats went up in flames.

The marina is located just west of the tiny community of Canoe. Its website says the business offers boat and personal watercraft rentals sales and service. It also has a gas bar to serve boat traffic.

Eye witness video from the scene of a major marina inferno on Shuswap Lake shows several boats were destroyed.

The fire erupted at Captain's Cove Marina on Canoe Beach.

Video by Keith Phare shows intense flames and thick, black smoke from the dock area of the marina.

All boats that had been burning at Captain's Cove Marina in Canoe have reportedly been doused.

It's not clear if the structure is still on fire, and Castanet is awaiting call-backs from the City of Salmon Arm and fire department for more information.

Environment Canada has been requested to the scene, according to a tweet from @Shuswapscanner. 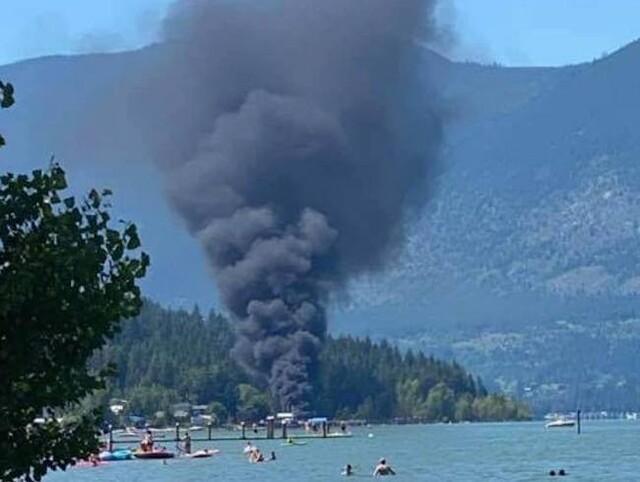 Firefighters are battling a large blaze on the shores of Shuswap Lake, at Canoe Beach.

Multiple boats were reported on fire near Captain's Cove Marina after a possible explosion.

The fire is believed to be in the marine fuel shed there, and is sending plumes of black smoke up above the lake.

The City of Salmon Arm is requesting people avoid the area.

Firefighters from two firehalls and a marine unit are responding to the blaze, according to tweets by @Shuswapscanner.

A 60-foot area is believed to be ablaze.

The Salmon Arm Fire Department has reportedly requested that CP Rail halt train traffic through the area until the fire is extinguished.