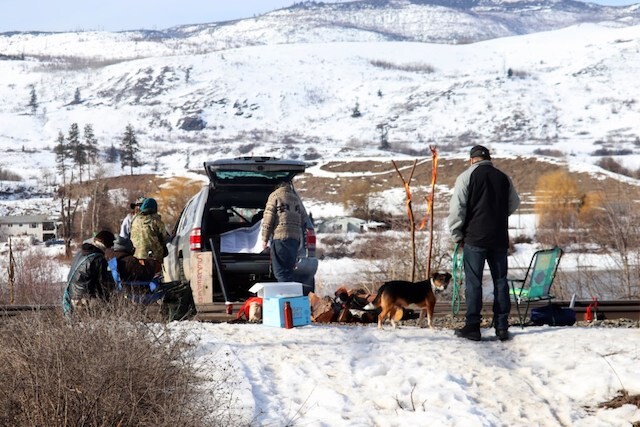 Another rail blockade started this morning on Neskonlith land, as a group called the Secwépemc Sacred Fire have joined in nation-wide demonstrations in support of the Wet'suwet'en hereditary chiefs.

Set up on Canadian Pacific tracks across from the Neskonlith Hall (just west of Chase), the blockade is a sign of solidarity with the Wet'suwet'en First Nation; they've been fighting to keep Coastal GasLink from building a pipeline through their territory in Northern B.C.

Protests have been going on across Canada for weeks and this was the first chance for the local group to show their support.

"Today was when we got a chance to get our community together and get on the rail tracks," said a representative of the Secwépemc Sacred Fire at the blockade. "As long as this issue drags on, there's going to be a continuing blooming of these kinds of actions. What people can do is talk to their own MPs and MLAs and Prime Minister and tell them to talk to the Wet'su hereditary chiefs and everything will be over."

The representative would not give their name to media.

The group says the blockade will continue for the foreseeable future.

For today's demonstration, the group says they've been approached a few times by CP police, but there have been no problems.

The Secwépemc Sacred Fire also set up blockades in the past year to keep Arrow Transportation from dumping biosolids in Turtle Valley.

"The government is not doing enough to speak with, even to meet with us," says the representative. "It's very important to note that this is still unceded and unsurrendered territory so neither government, either provincial or federally, actually has any legal tools to be exerting the amount of aggressive jurisdiction they're asserting here. So yeah, we don't feel like we're being addressed appropriately at all."

Protesters have set up a rail blockade on the CP Rail line south of Chase.

Photos from the scene posted to social media show signs in solidarity of the Wet’suwet’en hereditary chiefs’ opposition to the Coastal GasLink project in Northern B.C.

“Sacred Fire CALL OUT: We are standing on the tracks across the highway from Neskonlith Hall. Come one come ALL!” reads a Facebook post from Anushka Azadi.

Photos show RCMP at the scene speaking with protesters. 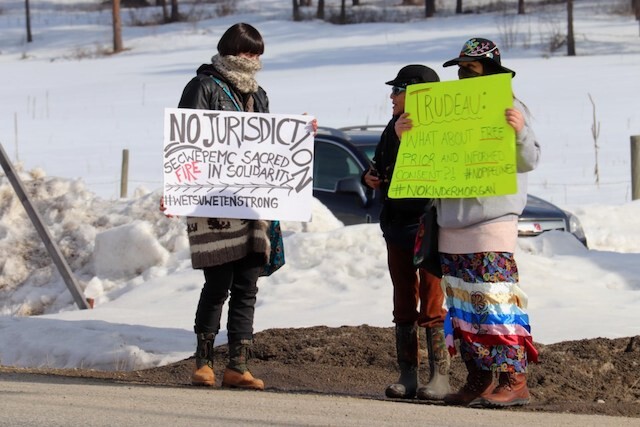