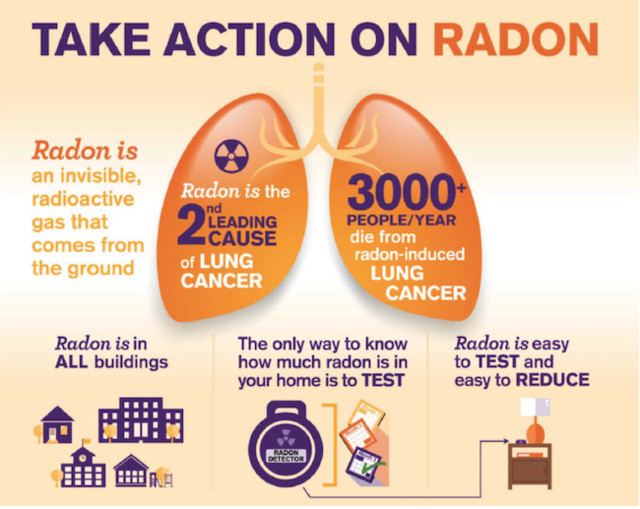 It's a silent killer that is present in every building in the province.

Radon gas is a tasteless, odourless radioactive gas produced by the decay of uranium naturally present in the rock and soil.

Outdoors, radon levels are low, but the gas can enter buildings through openings in the foundation, making indoor levels much higher, especially in basements and lower floors.

Exposure to radon gas is known to cause lung cancer and is the leading cause of lung cancer in non-smoking Canadians.

The only way to know if radon is present in a home is to test.

Revelstoke Mayor Gary Sulz has become an advocate for testing after finding excessive amounts of the gas in his home.

The Health Canada guideline is that remedial measures should be undertaken in a dwelling whenever the average annual radon concentration exceeds 200 Bq/m3 in the normal occupancy area.

Sulz, who is also Revelstoke municipal director for the Columbia Shuswap Regional District, made a presentation to the board on the dangers of gas.

"I'm like the poster child for radon testing," says Sulz, who was visibly emotional as he described how his father-in-law, who lived in that home for much of his life, died of lung cancer.

In the year since the home was tested, Sulz has conducted mitigation measures including venting measures so the radon cannot build up inside the home. Tests now show the home as in the acceptable range.
The costs associated with radon mitigation is similar to other home maintenance projects, like installing a furnace or air conditioner.

"It was not invasive to have it done and the costs was not that expensive, especially when it comes to the safety of your family," says Sulz. "I would say, get it checked out."

As part of the initiative to spread public awareness of radon a free public information session in Salmon Arm on tonight from 7-9 p.m.

Residents can join the 100 Test Kit Challenge and receive a free radon test kit. The session will be held at Okanagan College, Room 130.