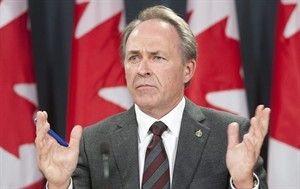 Photo: The Canadian Press. All rights reserved.
NDP MP Pat Martin gestures as he speaks about asbestos during a news conference on Parliament Hill in Ottawa, Tuesday October 18, 2011. THE CANADIAN PRESS/Adrian Wyld

The robocall controversy appears to be broadening, with opposition parties claiming the number of ridings affected by voter-suppression calls in the last federal election is greater than first thought.

New Democrat MP Pat Martin says he is aware of at least 34 ridings that received automated phone calls , although his party lists only 29.

Meanwhile, Liberal Leader Bob Rae said his party is aware of 27 ridings, but he expects the number to rise by Monday, when the House of Commons resumes.

The opposition are accusing the Harper Conservatives of orchestrating a campaign of dirty tricks in the May 2 election, but the Conservatives have denied the charges.

Elections Canada and police are currently believed to be looking into reports that automated calls in as many as 18 ridings falsely advised voters that the location of their polling stations had changed.

Martin says he is firm on his number and has since heard of two more ridings, but was not yet adding them to his list.

Meanwhile, lawyers for RackNine Inc., an Edmonton-based automated dialling company that worked on the Conservative campaign, has sent a letter to Martin demanding an apology or face a defamation suit for comments he made about the company.

Martin says he has no intention of apologizing.

Do you agree with the province's push to get kids to take the flu shot?