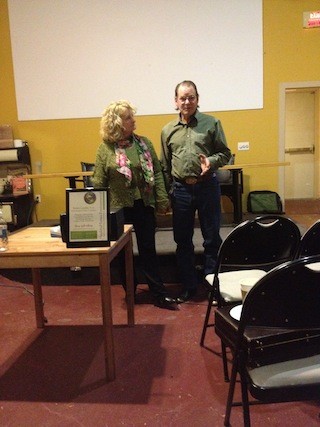 Photo: Deborah Pfeiffer
Don and Deborah Stutters have no power

A Peachland couple who recently had their power cut off by BC Hydro, after reacting to the installation of a smart meter at their home, were among the speakers at an often heated meeting Tuesday night.

The Penticton gathering, organized by Locals Supporting Locals, was set up to draw attention to smart meters and the high electricity bills Okanagan residents have received in recent months.

“We are here for a couple of reasons, some in regards to smart meters and the rising bills that keep going up no matter what,” said Kevin Proteau of Locals Supporting Locals. “When there are concerns in the community, we should all be coming out to support each other.”

Deborah and Don Stutters told the crowd, gathered at Smith and Company, that initially they had a smart meter installed against their will.

As  a result she said her electromagnetic sensitivities increased to the point where she could not sleep well and suffered from considerable memory loss.

By April of this year , she took it upon herself to research where she could find an analogue meter, which met the standards necessary and subsequently purchased one and installed it.

Not long after threats, phone calls and visits began, with the couple being told it’s either a smart meter back on their house or no power.

Then on April 17, they had their power disconnected.

She further thanked  a neighbour who brought over a generator to help out.

“That’s our story. There were many threats and on Wednesday they turned off our power,” she said. “I am asking all people concerned to call BC Hydro.”

The around 30 people in attendance were also given a presentation by environmental consultant Farren Lander on electromagnetic fields, electropollution, described as dirty electricity, workplace hazards and home safety risk factors.

He further touched on people reporting health problems, such as migraines, sleep disorders and anxiety when wireless smart meters are installed.

It is not just humans who suffer, he claimed. There is also an impact on honey bees, birds, plants and farm animals.

Among the solutions he offered were beach walking, forest bathing, daily exercise and a sleep sanctuary for restorative health.

Several times during the presentation, a man who identified himself as a local electrical inspector, debunked what Lander was saying.

His comments were so lengthy that a woman in the crowd asked him to stop talking, and he was later asked to leave.

Further discussion at the meeting, also attended by several area politicians including Dan Ashton and acting mayor Garry Litke, covered efforts people are making to put together the history of their electrical bills from the last few years, with some planning to make it a legal issue.

BC First candidate Doug Maxwell also told those gathered he was looking into the history of the ever increasing electricity bills.

Proteau said he hopes to have more meetings on the matter in the future.

“We are going to discuss this in smaller groups,” he said. “Something like this doesn’t happen overnight.”