Penticton residents who live near a home which burned this weekend say they plan to ask City Council to put in fire hydrants in their neighbourhood. 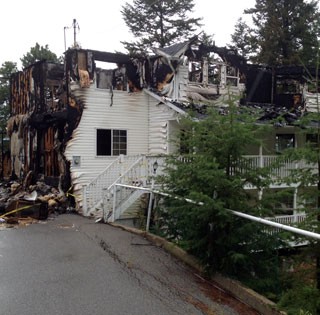 They are taking the action after firefighters were hampered by a lack of water to battle the house fire, which broke out on a road high above Penticton on the edge of the forest.

“It has been a topic of conversation for many years, but we haven’t pressed very hard,” said Steven Boultbee, who lives nearby. “But something like this happening changed that.”

According to Penticton Fire Department Captain Howard Grantham, the department was called out to the structure fire at 1133 Spiller Road about 1:30 a.m. on Saturday. When they arrived they found the home on fire as well as brush and trees surrounding it.

They attempted an initial attack, but there was no water supply there, so only water carried by the trucks could be used to fight the fire. The Naramata Fire Department and B.C. Forest Service suppression crew were also called in with their water tenders.

“The water tenders were used in a shuttle system, but there was not enough water for a serious attack,” he said. “This definitely indicates the need for fire hydrants in all residential areas.”

The owner of the home was not there at the time of the fire. A tenant who was in the house escaped without injury.

Boultbee, who left his home with his family when the fire started, said had it been more normal weather conditions for this time of year, it could have been something akin to Kelowna in 2003.

“The firefighters were close to helpless, because the fire was absolutely roaring when they got there,” he said. “My concern was for our home, surrounding homes and the forest.”

Councillor Garry Litke said he was going to a meeting to learn more about what happened on Tuesday afternoon.

As for the fire hydrants, they are a good idea, he said, but the question is who pays for them.

“When people move into an area, they know what services they are getting when they get there,” he said.