The history behind Slack Alice's 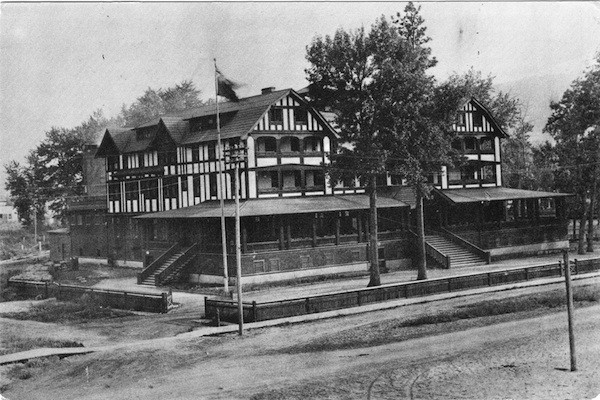 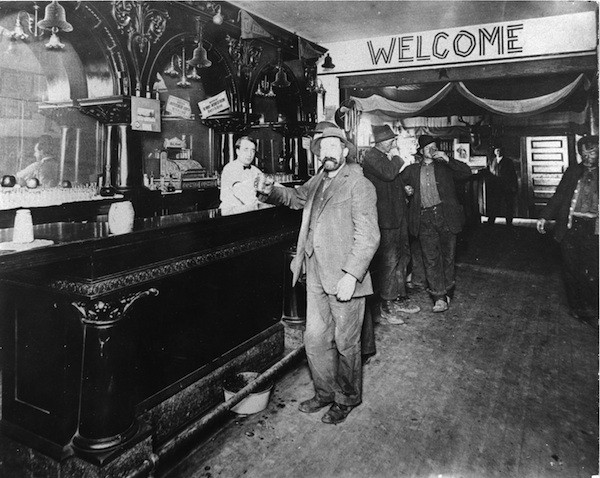 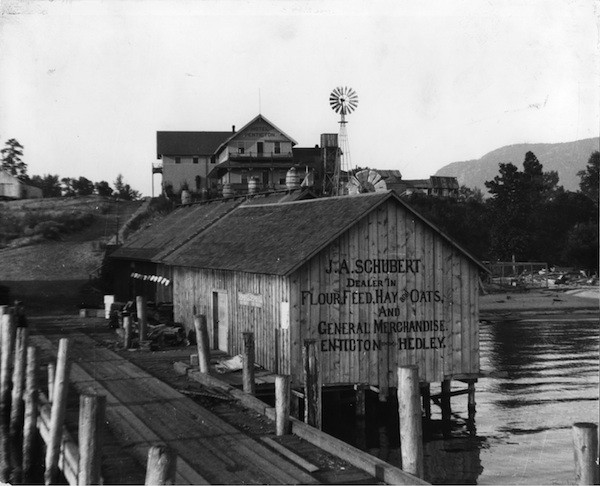 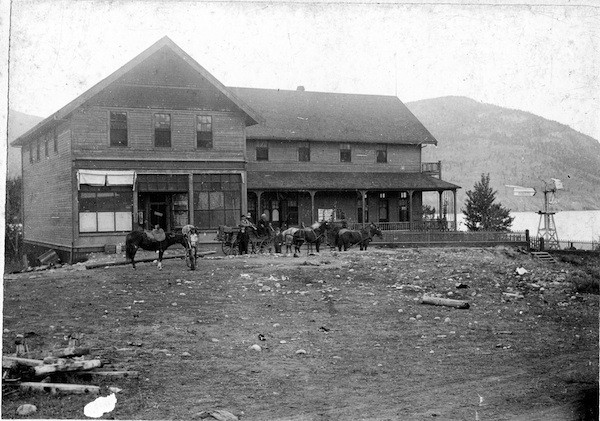 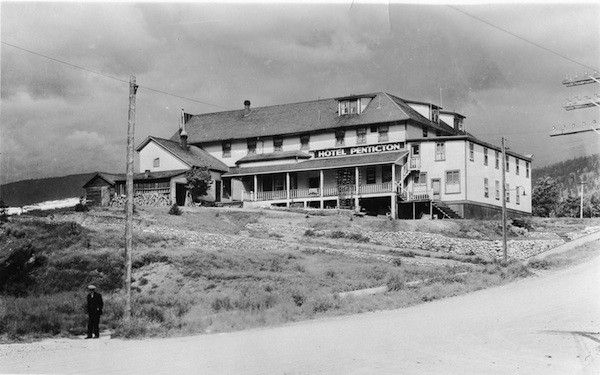 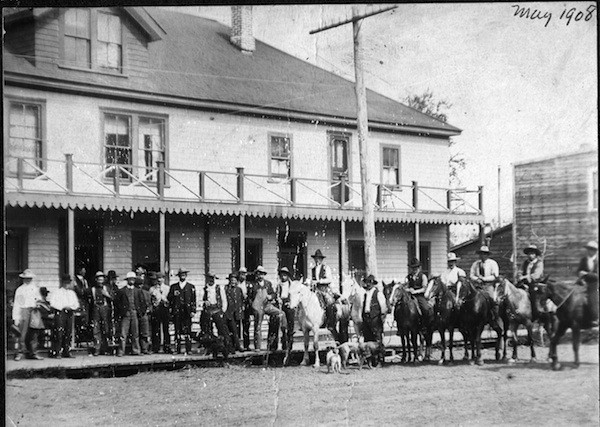 Photo: Contributed - Penticton museum
Group of men in front of B.C. Hotel – May 1908 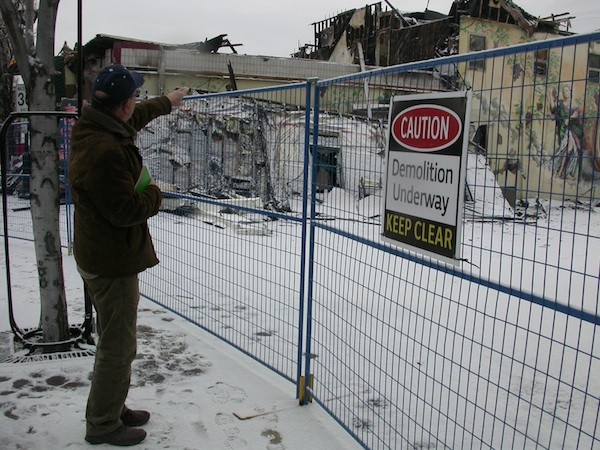 In the early 1900s, a girl named Bertie Barnes was befriended by a couple of ladies of the night known as Marie and Louise who were believed to ply their trade at the Hotel Penticton.

During the day when the two women had nothing to do they would walk with Bertie, whose family ran the hotel, along the beach to get ice cream. The relationship was short lived, however, when the girl’s mother realized they were possibly priming the youngster for a life in their world.

It’s just one of the stories from Penticton’s past, which includes the possible existence of bordellos and rowdy biker bars that hosted strippers.

Now that Slack Alice’s Show Pub, the last strip club in town, has been destroyed in a fire, it is a time that may never come again.

“There have really been two classes of people in Penticton, the very conservative and those that don’t care whether strip clubs are here or not,” said Randy Manuel, a Penticton historian and Barne’s grandson.  “But I see the burning down of Slack’s as the end of an era here. It’s something I believe is fading away in all of British Columbia.”

Long before pubs featured unclad women, there were believed to be bordellos in the city’s first hotels.

One of the earliest was said to be housed in the Hotel Penticton, according to Manuel.

Built in 1892 and located on Vancouver Avenue at Van Horne Street, the hotel’s house of ill repute sprang up to cater to miners coming in from neighboring  towns.

It was located above the sample room, where out- of- town merchants would peddle their wares at the hotel, and was known as Ram’s Pasture, he said.

“It was a local term used by the townspeople back then to describe the house of ill repute in the Hotel Penticton,” he said.

The Valley Motor Inn, which housed Slack Alice’s, was first known as the B.C. Hotel.

Built in 1905 it had a bordello on the top floor for the orchardists, ranch hands and miners who worked in the South Okanagan, according to Peter Ord,  manager/curator of the Penticton Museum & Archives.

About three years ago, Mary Ann Wheeldon, a longtime Penticton resident and then volunteer at the museum, told Ord a firsthand story of her experiences with women who allegedly lived in the hotel.

“As a young girl, she remembered talking and playing with the ladies of the bordello during the day,’’ he said.  “She recalled they were very nice and proper.”

Although memories of the bordellos have been shared over the years, there is no actual record of such places in Penticton history books, according to Brian Wilson, executive director of the Okanagan Archive Trust Society.

With British colonialism then dominating the town he is inclined to believe their existence is more of an urban myth.

But it is possible ladies of the night stayed two doors down from the B.C. Hotel at Ideal Rooms.

“It was certainly never admitted there was a bordello here,” said Wilson. “This town has always been a God-fearing community with a tremendous amount of churches.”

The Hotel Penticton was destroyed by fire in 1927, while the B.C. Hotel, renamed the Valley Hotel, became increasingly run down.

It continued to operate a seedy saloon, however, and after World War 11 other beer parlors sprang up at the Three Gables Hotel and the Hotel Incola to serve as meeting places for returning soldiers.

It is possible that ladies of the night worked the tables at the parlors, but there is some confusion as to exactly what took place in that time frame, said Manuel.

It is known there was no live entertainment because of then draconian provincial liquor laws, he recalled.

It was about four decades ago that the Incola began showcasing strippers, along with the Valley Hotel, he said.

“From 1974 to 1979 I worked the night shift at the post office,” said Manuel. “If things were slow, we would take a midnight break at the Valley Hotel, and there were strippers there then. “

But any stripping that did go on at that time was not sanctioned by the city, according to Wilson.

Both the Incola and Three Gables are now gone. The former was taken down in 1980 and the latter was destroyed in a fire in 2000.

The Valley Hotel, later named Valley Motor Inn,  carried on, and in 1982 Slack Alice’s was opened by Ron Bell from Alberta.

Thousands of exotic dancers, including some local girls, performed there over the years.

One went on to earn the title of Miss Nude B.C., recalled Wilson.

Exotic dancers from out of town stayed above Slack’s in the hotel rooms while the portion above the Chinese Laundry restaurant and Bubblee’s Beer and Wine Store,  the two other businesses burned in the blaze, was mostly for men living on a pension.

One of the best known strippers was Mitzi from Vancouver,  who would put on quite a show using ping pong balls.

“The whole town would come out to watch her, even underage kids snuck in,” said Wilson. “She truly shone in her field.”

Now the strippers who danced for decades in Penticton will be going elsewhere.

Wilson believes now this type of once forbidden entertainment is gone, it will likely not return with the aging population in Penticton.

“We probably will not have another strip club,” he said. “We are at a time in our history when the needs of our populace are different.”