'It's frustrating': Downtown Penticton ice cream shop victim of overnight smash-and-grab for third time in less than a year 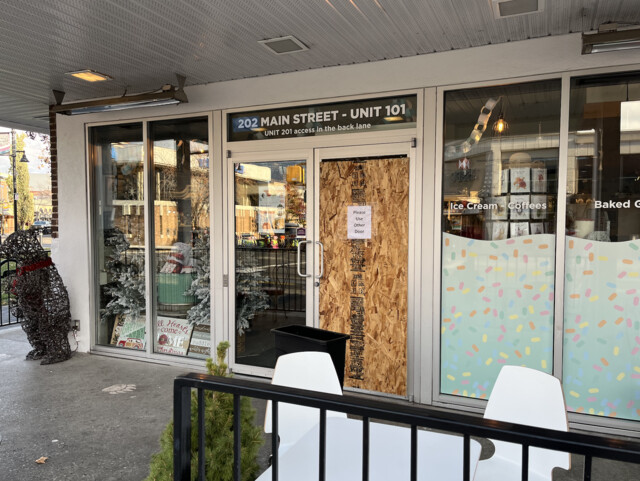 A downtown ice cream shop and cafe was the victim of a smash-and-grab break in early Thursday morning, the latest in a string of such incidents that have left the owner frustrated.

Kelsey Hoy owns Tickleberry's in Penticton, sister store to the original beloved Tickleberry's started by her parents in Okanagan Falls more than 30 years ago.

Less than two years ago, the downtown expansion opened with Hoy at the helm, but unfortunately, the location has been plagued by break-in incidents.

"This is our third time having our door smashed in just this year," Hoy said Thursday, standing in the store on Main Street which now has a boarded-up front door. Thieves smashed their way in shortly after midnight, making off with a bunch of stock.

"As you can see, this one is permanently wood, because that's where they've come in before," she added, gesturing to a side entrance. "And now it was the front door. So I'm not super happy."

It is a frustrating cycle she and her family did not anticipate — the Okanagan Falls location does not have the same issues.

Hoy is now considering adding bars to the windows or roll-down shutters, a step more and more downtown businesses are taking.

"When you walk the streets, it's most of us now. So that's what I'm going to do today, just talk to people who've put bars up to ask, is that even enough? Was that enough to deter people?"

As for the perpetrators, Hoy wishes there was a better way for police and the justice system to ensure they face consequences for their actions.

"It's just a frustrating situation."