Vees add to Ring of Honour 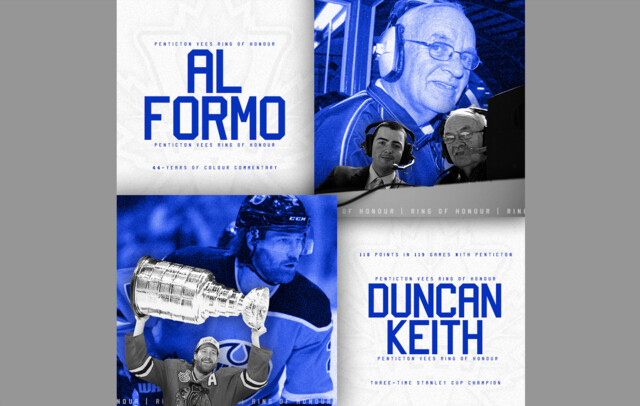 The Penticton Vees game on Wednesday will have a special addition, with the induction of two notable names into the organization's Ring of Honour.

Duncan Keith, known for his time in the NHL with the Chicago Blackhawks and Edmonton Oilers, and Al Formo, a familiar analyst voice on Penticton junior hockey radio broadcasts for over four decades until his retirement in 2012, will both be inducted at Wednesday's game.

“We are fortunate to have great alumni that gave so much to our program and to the game itself. Both Duncan Keith and Al Formo were integral in building the foundation of Penticton Junior Hockey,” said Vees president, general manager and head coach Fred Harbinson.

“All of Penticton is proud of Al’s longevity in the sport and Duncan’s storied professional career and now they will have their names displayed forever in the rafters of the SOEC.”

Keith played two seasons for the Penticton Panthers before embarking on a decorated NHL career. Keith, who was born in Winnipeg and grew up in Penticton, played for the Panthers from 1999-2001.

During his 17-year career in the NHL, Keith won three Stanley Cups, and also played with gold-medal winning Olympic Team Canada in 2010 and 2014.

The Ring of Honour induction ceremony for Keith and Formo will be the first since 2017, when Brendan Morrison and Paul Kariya were inducted during the Western Canada Cup tournament.

Tickets for the game at the South Okanagan Events Centre, which will include the induction ceremony at the beginning, are just $10 for adults, and kids 18 and under are, as always, free.

The Vees are currently on an incredible hot streak, having yet to lose this season, with a 20-0 record.