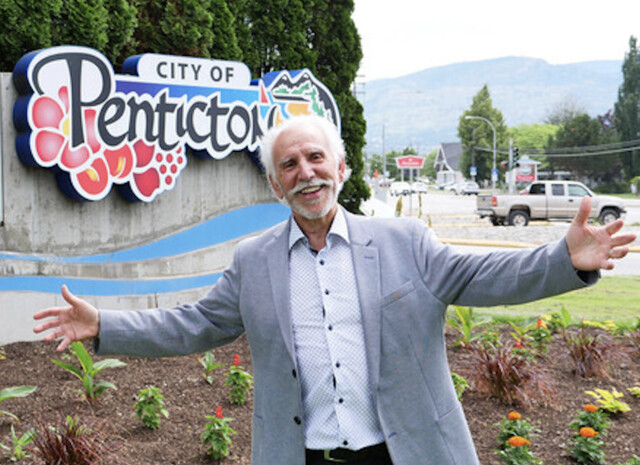 John Vassilaki is the incumbent Mayor of Penticton, having served one term, and describes the job as his passion.

Castanet: Why are you running for a second term as mayor?

John Vassilaki: The most important part is experience. I've been on city council for four consecutive terms. And four years as the mayor. It takes a lot of knowledge to know what to do.

I've lived in Penticton for 66 years. And I know every aspect of the community and the people and most importantly, I know the culture of the city. And where the citizens stand on issues. I'm the best candidate.

If someone loves the work they do, nobody can do the job a lot better than they can. That's another one of the reasons why I'm running and I should be, again, the next mayor of Penticton.

C: What is something you were proud of achieving this past term as mayor?

JV: The most important thing is how we came out of COVID and how we treated the public, how the city council treated the public during COVID, and how much we helped out the community. Most importantly, financially we helped out the community by cutting the cost of the electrical to the homeowners, and we extended the time for tax payments, property tax payments, from July to November. All that helped the public financially to come out of the situation that we've been in for two and a half years now.

C: Is there anything you regret or wish had been done differently during your past four years as mayor?

JV: I don't really regret it, but I'm so sorry that we didn't get on it faster. In 2018, when we were elected to city council, folks working in the downtown core were scared to death to go to their cars after work, the fear in the community was that they had to go in pairs or more than just one person together in order to get to their cars ... It was just getting out of control.

We've changed a lot of that, we passed a bylaw, that you're not permitted to sleep or lie down on the sidewalks in much of the area downtown. That got rid of that group of people that caused all those those problems.

And then we have the prolific offenders. We have to do a lot to prevent what's happening by all those that continuously make it so unsafe for our public.

C: What's the next step in tackling crime issues in Penticton?

JV: The RCMP is recommending charges against these prolific offenders and those that continuously break the law and threaten our public and it goes to deaf ears in the judiciary, they are not putting the law in place. In other words, they don't give out justice.

The [Crown counsel], they're not doing their job by not laying charges as the RCMP is recommending. And when they do go to court, [the accused individuals] get released immediately and that's the 'revolving door' that is taking place that has to stop.

The only way to do it is for the city to hire its own counsel. So when these folks are arrested, we have someone in court that can talk on behalf of the City of Penticton and its citizens to make sure that justice is served, and our community is safe from this prolific offenders and the others that break the law. It's going to cost money. But you know, when it comes to safety, no amount of money is too much to pay for the safety of our citizens. And that's what I would propose when I'm back in as the mayor of the city.

JV: We have to bring all our partners together, communicate with all of them. We have to make sure that everybody does their duty. That includes issues of housing, includes the attorney general.

The most important thing is that they don't only house those folks that are homeless, but they are also housing those with addictions, whether that's drugs or alcohol, or whatever it is.

And you know, when you're not addicted, but you're living in the same premises as those that are addicted live in, peer pressure takes over and you will become addicted, like all the others.

So that has to change, we've got to separate the homeless people from those with addictions, those people with addiction should be put in a home that they're looked after by Interior Health to get better and to live a better life.

C: There is a major housing crunch in Penticton. A lack of rental stock, as well as people being priced out of purchasing their first properties. Given we have a limited geographical footprint in Penticton, how does the city grow and address the lack of housing?

JV: This is probably one of the issues that the city can play a big role in and that we have one tool in our toolkit for making housing more reasonably priced, and that is through our zoning, our bylaws.

We have the power to rezone land and change the zoning regulations where we can allow a larger footprint or the development to be put on a certain piece of land. More doors on that piece of land so that land value per unit will go down considerably, therefore, lowering the value of those units. Whether they are for sale or whether they are for rent, it's so that there will be be low market value units for people that are less fortunate and then most of us can live comfortably and be able to have a roof over their heads.

I'm not in favour of going up the hillside or, for example, the Naramata Bench or any of our agricultural areas.

But I am very, very supportive of the valley bottom where, like I said, we can use our zoning to make sure that we have more units per piece of land. And I'm not against having a certain amount of height. I don't believe that ten storeys is very high, but we have to make sure we put those high rises, if you want to call them that, ten storeys high, in the right locations.

Near schools so families' kids can attend, or near shopping so they don't have to use automobiles, therefore, our carbon footprint will go down. All those good things that come along with having people living in the right places and making sure that neighbourhoods aren't being ruined by what type of development goes into them.

C: What's the city's role in attracting new businesses, and making sure existing ones succeed and stay?

JV: The city can have a huge role in attracting businesses, but we have to take care of retention of the businesses that we have in place already. We have to make sure that they succeed in business, that they have a profitable business and that they're not going to close their doors and go away because that doesn't help the community at all.

If we have to give incentives in order to make sure that that happens, I'm all in favour of that. Not only that, but we have Travel Penticton who doesn't only advocate for tourism to come to Penticton but they also advocate to bring new businesses into our community.

During COVID many corporations had their people working from home and that continues, they don't have to live in a large centre in order to get those high tech jobs. They can do it right here in Penticton. Even though their company head office might be in Vancouver, Victoria, Calgary or Edmonton, it doesn't matter, they can do their work here in Penticton in their own home.

I own apartment buildings, I have a lot of tenants that work in Calgary, two weeks away and they're back here with their families. They also can work on their computer from their home. I have tenants that do that. And they go to their head office maybe once a month, or whatever the case may be.

Those are the things that we should be looking at to make sure that we can get a larger corporations to relocate to Penticton. You don't need to have your business in a large centre in order to make it profitable anymore.

C: If you had $1 million to spend on anything in Penticton, for the municipality, how would you spend it?

JV: That's easy. I would put it towards a better lifestyle for our seniors. They're the ones that built this country to what it is today and we owe them a lot.

For our federal government not to give a livable pension to our seniors, it's a crime, and we should be pushing for that. For things to be done by, especially by our two upper levels of government, provincial and federal, we have to speak out, we have to stand up for our rights to make sure that what we want and what we need is actually brought and given to us. And I don't mean we want a freebie for for us to live by. But we need to make sure that the laws that they bring into place and how they charge and how we pay our taxes and why we should get a big bang for our dollar and we're not getting it.

C: Imagine you have been re-elected, and it's four years from now. What have you achieved for the city?

JV: I think the most important thing is that we got to get take care of the crime. That's number one. The other one that I want to improve is the housing situation by using our bylaws, especially our zoning bylaws to make sure that reasonably priced housing is made available to our people. That's what I want to see in the next four years.

That's what I want so that when my four years are up, people will turn to Vassilaki and say, 'There's the man that helped with crime,' 'There's the man that helped with housing' in Penticton. And we don't see all those folks who work in the streets, pulling all those carts behind them. Some of them even have six or seven carts dragging behind them. That's what I want to see disappear in the next four years.