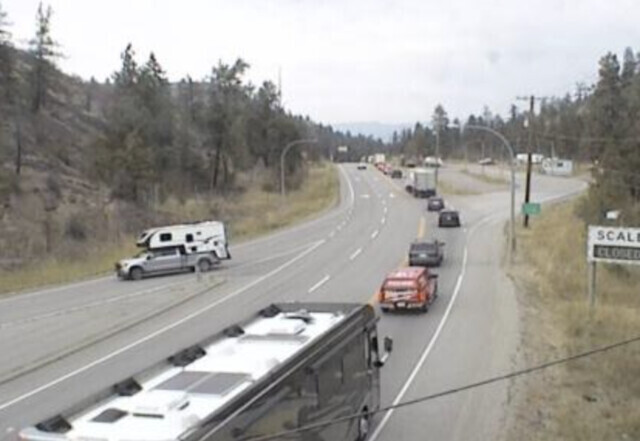 The male driver of the motorhome who was hit by a camper van last week while travelling through Kaleden on Highway 97 has now passed from his injuries.

BC Highway Patrol confirmed the fatality on Tuesday morning.

RCMP and emergency services responded to the crash on Highway 97 near the scales, between the junction with Highway 3A and Lakehill Road on Thursday, Sept. 29 at 9:25 a.m.

The highway remained closed off from traffic until 6 p.m. that day.

Police said that a northbound GMC camper van had entered the oncoming lane and collided head-on with a southbound motorhome.

The male driver of the motorhome, a man in his fifties from the area, was seriously injured. He has now passed. His partner was reported to be shaken but unscathed.

The driver of the GMC camper van, a man in his twenties, was critically injured.

On Monday, BC Highway Patrol Keremeos put out the update asking for the public's help further investigating the incident. They are specifically looking to speak to a small red car that had been travelling southbound when the collision happened, which appeared to have pulled over, but did not remain at the scene.

"This individual is considered a witness and police would like to speak to the driver and any occupants of this vehicle," police said. The vehicle, which may have been driven by a female driver, is not considered to have been involved in the crash.

Anyone with information regarding this collision, including any dashboard camera video of the crash or any pre-collision driving of either vehicle, is asked to please contact BC Highway Patrol Keremeos at 250-499-2250 and cite file 2022-4544.