A young family was out hiking near Osoyoos this week when they came across a creepy crawly discovery.

Andrew Robertson was out with his family on Mt. Kobau when they reached the lookout and decided to take a rest.

He moved a rock to sit down, and was startled to discover a swarm of hundreds of red, black and white insects, initially thought to be ladybugs.

"We all had never seen anything like it. We then went on to move rock after rock, and each rock had the same underneath. It was insane and super creepy!" Robertson said.

After going home, they started Googling, and began wondering whether the "ladybugs" they saw were something different.

Their slightly elongated bodies and orange shade, along with a white area on the back of their heads with an "M" or "W"-shaped black marking, led to the possibility they were Asian lady beetles.

Asian lady beetles are a non-native specific type of ladybug that were brought to North America in the 1970s to control aphids and other crop-eating insects, according to Health Canada's pest control website.

"Their fast reproduction and ability to withstand fairly harsh winters have helped them become one of the main species in Canada," they say.

"They range in colour from a mustard yellow to a dark reddish orange. They have a varying number of black spots on their wing covers, and some may not have any spots."

They swarm in the fall, looking for places to spend the winter, and can be a nuisance to homeowners, working their way into foundations and walls through any cracks.

Whether or not the swarms the Robertson family stumbled upon were Asian lady beetles or their more benign native cousins, it was certainly a sight none of them will forget. 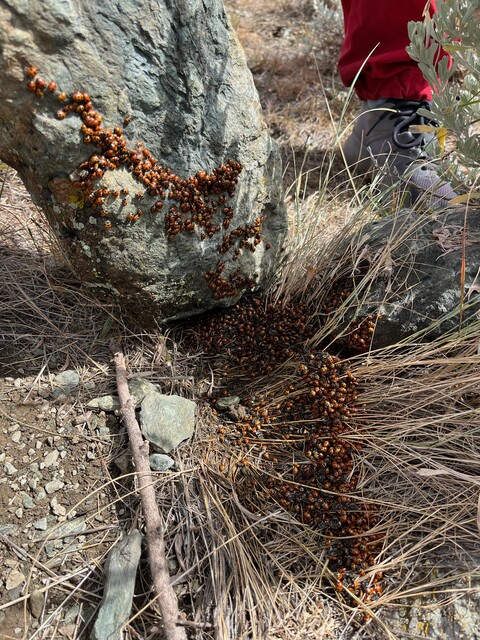