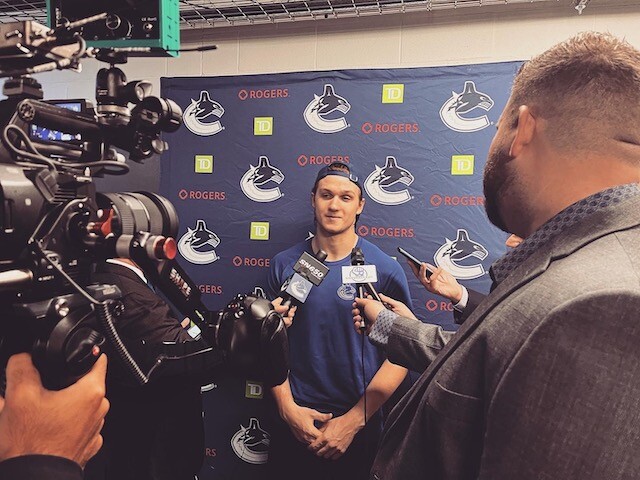 The Young Stars Classic ended Monday with a battle of the undefeated -- the home province Vancouver Canucks taking on the up and coming prospects of the Edmonton Oilers.

The Canucks got a pair of goals from 22-year-old Swedish forward Linus Karlsson, but it wasn't enough to sink the Oilers as Edmonton tallied five goals of their own, leaving Penticton with a record of 3-0.

Although the Canucks' prospects were unable to find the win in a hard-fought game that ended 5-2, Abbotsford Canucks head coach Jeremy Colliton was pleased with his team's performance over the four-day event.

Karlsson stood out in game three with his two-goal game, and coach Colliton believes it was good tournament for the player as he could potentially see some NHL ice-time later this year if he plays his cards right.

"That was a big goal. He kind of finds a way to put himself in those spots. Like I said yesterday, he makes little plays, he's not just a shooter. He thinks the game well, it's just a matter of finding a way to get himself in that half of the rink where he is super dangerous. But I thought it was a good few days for him," added Colliton.

It wasn't just Karlsson who stood out in the all-rookie tournament. 2021 second round pick Danila Klimovich had himself quite the tournament, building chemistry with linemate Tristen Nielsen. Here's what Nielsen had to say about the 19-year-old Belrusian shooter after he tallied a primary assist in game two:

”I was shocked,” Nielsen said. I was like, ‘oh my goodness.’ It was a perfect pass, you couldn’t have asked for a better one. He does that sometimes, he’s so deceptive. He’s got the hardest wrist shot I’ve ever seen in my life. And then every once in a while he’ll have the goalie think he’s shooting then he’ll just slide it over. He’s really skilled.”

Colliton also had some high praise for the Canucks winger after he struggled through his first pro season in the American Hockey League last year.

”I thought today was a step forward, especially the second period on,” Colliton said. “He was just a little harder on the puck, stronger on the puck, when he does that, he’s got a heavy shot, he’s got vision and made a couple of really nice plays to create offence for us. So, hopefully, he can continue to raise his pace with and without the puck. You can see the tools that are there. But I thought today it was a step forward.”

The Canucks were unable to leave Penticton undefeated, but the experience in a tournament like this far outweighs the end result.

"It's great for a lot of different reasons. Ultimately, we got a bunch of guys trying to prepare themselves for [training] camp in Vancouver, and we've got many guys going so that'll be good -- to play some games and that'll help them," Colliton continued.

"Obviously it's a great city, great area of the world, of Canada, of B.C. You can't ask for more to kick-off your season than to be here for a few days and play some competitive games. I think everyone got what they wanted out of it."

The prospects of the Canucks, Oilers, Calgary Flames and Winnipeg Jets will now prepare for training camp ahead of the 2022-23 NHL and AHL season. Training Camp is set to open for the Canucks on Thursday in Whistler.