Survivor raises for others 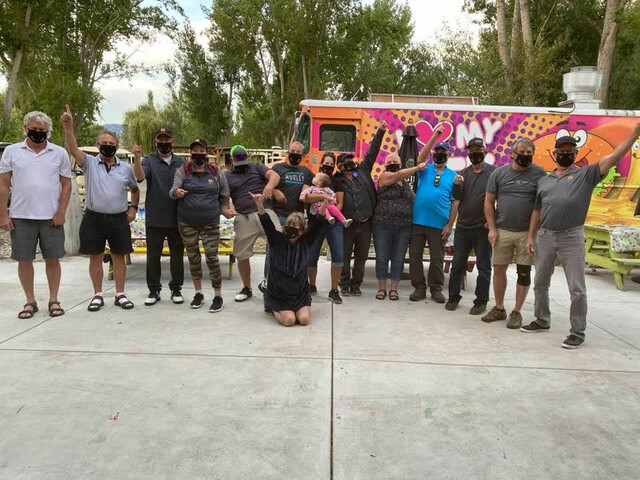 Photo: Contributed
Kathy Barnard is captaining a fundraising team along with members of Barefoot Beach Resort in honour of local resident Brian Dunn, who just recently lost his battle with melanoma.

The Save Your Skin Foundation is onto its fourth annual Move for Melanoma activity challenge, organized by a Penticton local who’s a terminal cancer survivor focused on raising funds and awareness.

Kathy Barnard was diagnosed with melanoma in 2003 and given just six months to live. She and her family gathered up their savings and went to the US for experimental treatments, where they were able to ship the drug to Canada.

Treatment at the time wasn’t available in BC, which moved the family out to Alberta.

“The expense of flying back and forth for the treatment and then the side effects of treatment were pretty harsh, so a family member had to come with me because I was hospitalized for seven days on each cycle,” she said. “As a family financially, it really hit us.”

“I mean just the mental stress of everything and for me, the move for melanoma isn't really just about raising money for patients. It's raising awareness of skin cancer period.”

The treatment cost Barnard $40,000 and while she was able to get a complete response against the cancer, she decided she needed to help others be able to have access to the same treatments, while not having to stress over the financials.

One hundred per cent of the funds raised through the event go toward helping melanoma and skin cancer patients reach treatment, in the form of flights, gas, accommodation, and uncovered drug costs.

“Right now we're helping a patient from Vancouver, whose treatments haven't been successful. We've got him going to Ontario for a clinical trial. So we're paying for that for him. We've got a patient in DC with ocular melanoma, and one of the treatments she needs is not paid for. So we're paying for that. So that's really what we do with the money we raise,” Barnard said.

“If you need financial assistance, we will do everything we can to get you the assistance you need.”

Barnard is captaining a fundraising team along with members of Barefoot Beach Resort in honour of local resident Brian Dunn, who just recently lost his battle with melanoma.

Dunn found out he had skin cancer after his wife was giving him a haircut at their salon and noticed an unusual mole.

“When I first saw Brian and he showed me the mole that he had, I mean, he was like it's whatever. It's just a little scab under my sideburn it's not a big deal. He went to a GP and the GP said to him, ‘Oh, it's not a big deal.’ And it was a really big deal. So to me, it's the message around this weekend is awareness,” Barnard said.

While the melanoma was removed, cancerous cells were found in his lymph nodes and Dunn sadly passed away.

“So it's really about education, awareness about skin cancer. It's a real thing. It's real cancer and a deadly one at that. But if we catch it early enough, it's preventable.”

Barnard ended up launching "Styling Hair and Saving Lives," offering free training for hair stylists and barbers nationwide who want to learn to spot any marks on their clients that look suspicious in February.

This year Move For Melanoma aims to raise $75,000 and is already 45 per cent of the way there.

Barnard emphasized that her goal for the weekend is education, awareness, early detection and prevention.

The Move for Melanoma event is happening over the weekend of Sept 23 - 25 in cities across Canada.

More information on the event, how to sign up and donate are on the SaveYour Skin website.