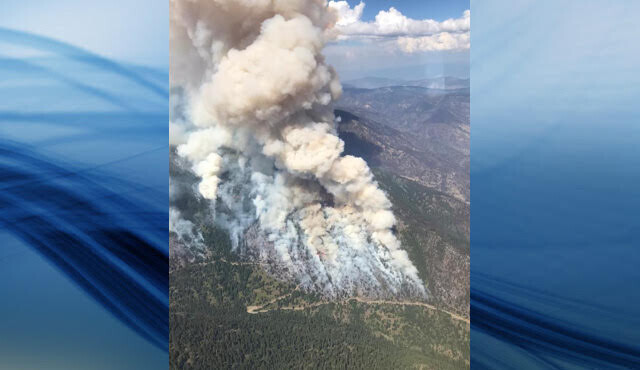 The BC Wildfire Service says it was able to make “good progress” over the weekend on containment lines around the Keremeos Creek wildfire.

That trend is expected to continue until Wednesday when temperatures will start to rise again.

Another aerial scan is planned on the fire in the coming days to help assess hot spots near the fire’s perimeter.

Most of the activity on Sunday happened in the northwest and southwest on very steep terrain.

“Nearby communities can still expect to see smoke within the fire's perimeter over the coming weeks. This is common with large wildfires, and smoke will continue to be visible until there is significant rainfall over the fire,” BCWS said.

While smoke rising from within the burn zone is common, smoke coming from green trees outside the perimeter should be reported.

There are currently 329 firefighters, 27 structure protection personnel, a liaison from Lower Similkameen Indian Band, 17 helicopters and 22 pieces of heavy equipment on site.

Evacuation alerts and orders remain in place. An interactive map of the evacuation zones is here.

Fire behaviour at the Keremeos Creek wildfire outside of Penticton remained relatively stable over the weekend.

According to BC Wildfire Services, fire behaviour was lessened by moderate temperatures and increased humidity Saturday and Sunday.

The fire remains stable along the western side of Highway 3A, and operational objectives remain mostly the same.

The fire's northwest flank continues to be the most active section of the fire, suppression efforts are challenged by steep terrain that is inaccessible to crews and heavy equipment.

Lightning in the Kamloops Fire Centre

BC Wildfire Service crews in the Lillooet zone of the Kamloops Fire Centre have responded to 17 wildfire starts in the last four days. These new starts are a result of thunderstorm activity which moved through the region between Aug. 10 - Aug. 13.

"Thanks to the public’s quick detection of these new starts, our firefighters and aircraft were able to effectively respond. Six of these wildfires are out, four are under control, and one is being held. Of the 17 new starts, all but two of the wildfires are estimated to be one hectare or smaller in size," says the Briana Hill, BCWS spokesperson.

The two wildfires which are larger than one hectare are classified as out of control and are burning at high elevations in inaccessible terrain in the Stein Valley. The other wildfires that are currently out of control are also burning on steep cliffs in challenging terrain which do not have safe access or egress routes for ground personnel.

Helicopters have been bucketing water to keep fire behaviour low while wildfire officers evaluate these incidents and come up with response plans that don’t compromise responder safety. These wildfires are not currently threatening human life or other values.