Evacuation orders have been lifted for another 220 properties

A little bit of rain has fallen on the Keremeos Creek wildfire Thursday morning, and crews are conducting a two-kilometre controlled burn just northwest of Olalla.

The RDOS Emergency Operations Centre provided an update on the fire situation Thursday afternoon, a few hours after an evacuation order for 220 properties in the Olalla area was lifted.

RDOS information officer Erick Thompson said the evacuation order was lifted as there is currently no present danger for Olalla residents, although the area is now under an evacuation alert in case conditions change.

BC Wildfire Service's Karley Desrosiers said the planned ignition north of Olalla is going well Thursday, but thunderstorms in the forecast could bring gusty winds, which could increase fire behaviour later this afternoon.

The thunderstorms that were forecast Wednesday never made it to the area of the Keremeos Creek wildfire though.

BCWS crews continue to mop up on the southern and eastern flanks of the fire, but it is burning uncontained on the western flank, which is inaccessible to crews.

The EOC will provide another live-streamed update on the fire Friday afternoon.

The Regional District of Okanagan-Similkameen's Emergency Operations Centre is live-streaming an update on the Keremeos Creek wildfire Thursday afternoon at 2 p.m.

Hundreds of Olalla residents can now return home after an evacuation order was rescinded Thursday morning.

The Keremeos Creek wildfire was first discovered on July 29, and it's since grown to more than 6,700 hectares in size. The fast-growing fire quickly forced the evacuation of hundreds of homes in the Apex Mountain, Green Mountain Road and Olalla areas.

But Thursday morning, evacuation orders have been lifted for another 220 properties in the Olalla area. These homes are now under an evacuation alert instead, and residents should be prepared to leave at a moments notice if fire activity picks up.

Highway 3A through the area remains open to local traffic only, and RCMP officers continue to patrol the area.

More accurate mapping of the large fire burning southwest of Penticton has brought the most recent size estimate to 6,712 hectares – down slightly from Wednesday's size estimate.

Conditions were favourable for fire crews overnight, and crews continued mopping up in the wildland-urban interface areas, along Highway 3A and in other key sections.

Thunderstorms are forecast in the fire area Thursday afternoon and into Friday.

“In the unstable airmass this afternoon, winds will be light however strong erratic and gusty winds should be expected near thunderstorms,” the BCWS says in an update Thursday morning.

“Crews have therefore been instructed to be prepared for increased fire behaviour and change in fire spread direction.”

Wednesday, there was an uptick in fire activity in the Cedar Creek area, and crews continue to work to encircle the fire along the western and northern flanks. Firefighters have established stable containment lines on the southern and eastern sides of the fire at this time.

The BCWS says residents in the area should expect increased smoke today, as crews may work to burn off a two-kilometre strip to solidify control lines northwest of Olalla along the Olalla Forest Service Road.

A drone-operated thermal scan was taken overnight in the Sheep Creek Road area, to help firefighters identify hot spots. The BCWS says this will help facilitate the return of evacuees in the area.

There are currently 282 BCWS firefighters working on the fire at this time, along with 51 additional structural protection firefighters from fire departments across BC.

Sixteen helicopters are also assigned to the blaze, along with 45 pieces of heavy equipment. 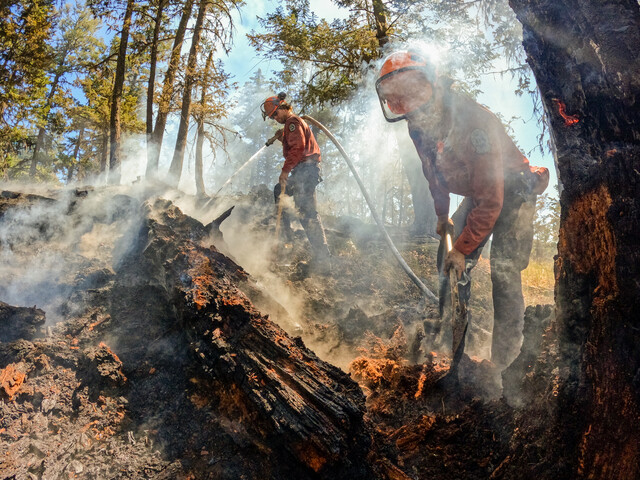 Photo: BCWS
Firefighters mop up a spot on the Keremeos Creek Wildfire.