'I need to do this': Keremeos woman drives hours with mini-horse in RV to fulfill stranger's dying wish 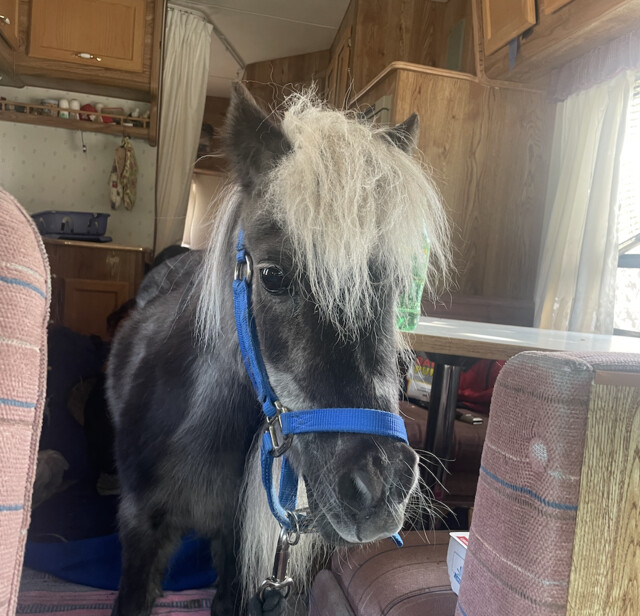 Photo: Shaynna Poirier
Dandelion on the RV that took him to fulfill a stranger's dying wish.

A Keremeos woman decided even a wildfire wouldn't stop her from helping a complete stranger fulfill her dying wish at Penticton Regional Hospital.

Shaynna Poirier was perusing social media last week when she saw a post in one of the local miniature horse Facebook groups she follows.

"A lady had posted that she was looking for someone to take a [mini horse] into the hospital," Poirier said. A woman with a terminal illness had scheduled a medically assisted death but had a final wish: To pet a horse one last time.

Poirier, a mini-horse owner, realized she would be in Penticton anyway to have her animals at Peach Fest, so she reached out privately to the woman who had posted, a family member of the individual in hospital, and said she could be there.

But all the plans were scrambled when the Keremeos Creek wildfire shut down Highway 3A, leaving Poirier on the wrong side of the fire from the hospital. Plus, she got an unexpected flat tire on her transport truck.

"So I put out another post. I didn't give any information of the lady I just asked if there's anyone around who could transport [the horse], because that was her last wish to pet a pony," Poirier said.

"I kind of tried for a little bit of time and no one seemed to have time or know anyone who had a mini that they could take over there. And our road was still closed. So I just kind of sat down and thought, 'I need to do this.'"

Poirier and her family loaded up their motorhome complete with mini-horse Dandelion, and drove the long way around through Osoyoos, avoiding the closed highway, making it to Penticton after 2.5 hours in the nick of time before the goodbye had been scheduled.

"They put her in a wheelchair and they brought her down and there was some family members around, and some of the staff, and it was just amazing. I was trying not to tear up," Poirier said of the emotional moment.

"She held him, held the rope, and she told us her stories with horses when she was growing up, and just the whole atmosphere was amazing."

Poirier said she knew she had made the right decision by bringing Dandelion all the way to Penticton despite the setbacks.

"Just being able to make that happen for her, it's just so hard to explain."