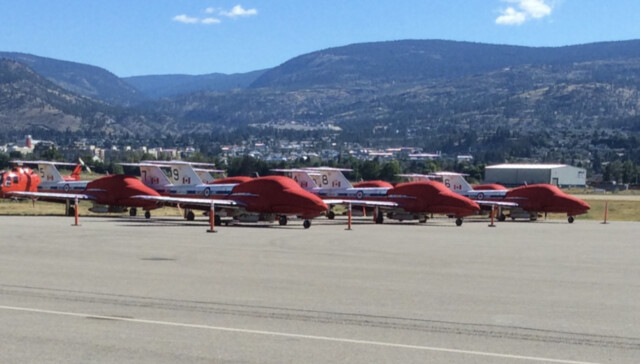 The Canadian Snowbirds jets stationed at the Penticton Regional Airport may stay for another couple of weeks as safety investigators from the Canadian military arrived in Fort St. John over the weekend to investigate last week's crash.

The crash of a jet at the North Peace Regional Airport halted all foreseeable shows and grounded the Snowbirds until an investigation could be completed.

Officials described the crash as the “hard landing” of a CT-114 Tutor, a jet used as part of the Fort St. John International Airshow on July 30 and 31.

"The sole occupant, the pilot, did not suffer any physical injuries but is being medically assessed as per RCAF policies," said Major Trevor Reid on August 2.

“The pilot is in good spirits,” he added in an update on Monday.

The downed plane was the second-to-last Snowbird due to leave the airport bound for Penticton when it crashed just after 12 noon last Tuesday. The Snowbirds had been set to take part in their show at the Penticton Peach Festival last Wednesday, which was then cancelled.

All shows have been called off for the time being while the cause of the accident is looked into.

"Our CT-114s will not be flown while a Royal Canadian Air Force flight safety team investigates to determine the cause of the incident. Flight Safety is paramount in the RCAF and investigations into incidents and accidents are done in a comprehensive and thorough manner following well-established procedures," the Snowbirds said in a statement on Aug. 4.

Alaska Highway News reported that an RCAF flight safety investigation team is currently on the ground as well as a recovery team, landing a C-17 Globemaster military transport plane at the airport on Saturday.