A night of 'chaos': Family stays to protect their ranch from the Keremeos Creek wildfire

A night of 'chaos'

It’s been a terrifying week for residents in the Similkameen area with the Keremeos Creek wildfire growing across the valley and closer to homes.

One family in the Cedar Creek area watched the fire descend close to their homes on Wednesday night.

The property had been on evacuation alert since Sunday, two days after the wildfire first started and sits about five kilometres outside of Olalla.

Two of the granddaughters, Taylor Thompson and Cedar Carter, told Castanet that even as the wildfire spread and they were put on evacuation order, they all had to stay to look after the farm.

“We can't leave our animals, we have cows right down there and our horses,” Thompson said.

“We have 200 head of cattle somewhere on the range out there. So we're just hoping they're okay and they got out,” Carter added. “This is our everything.”

The family first became worried on Sunday, travelling home from Merritt when they saw where the fire had grown to.

“We got the horses out and then Monday it was kind of in here and we were a little concerned but we were still just waiting it out,” Carter said. “It's been crazy. We've been all over the place…And last night, it was chaos.”

Thompsons said they were having dinner when, all of a sudden, they went down to the bottom of the road and the fire started coming straight down towards their homes.

“That's when everything, shit hit the fan.”

The family then called friends and relatives, asking for help.

“We are so thankful, so thankful for all of them. I think everyone we knew came out to help,” Carter said.

Both said they were also incredibly thankful for the firefighter's efforts in helping protect their homes.

“Even though it was so scary, it was amazing to see the community come together. It was freakin amazing. Thank you to everybody who did,” Thompson added.

Larissa Henschell, who is a resident of White Lake Road, travels into Keremeos daily for work and has watched the fire grow throughout the past week.

She said she saw the flare-up last night around the same area while heading home and was blown away by the scenes of the wildfire.

“We saw all of a sudden this big kind of cloud coming up from that way. It looked almost like an explosion, just huge smoke clouds really crazy,” Henschell said. “The smoke and the heat coming off of that fire, it's just unreal.”

“Even though it was kind of frightening a little bit at the same time, you're just mesmerized by the flames like the way they light up the trees and how bright it goes.”

One piece of comfort for Henschell was seeing how much the firefighters were doing.

“There's this one ranch right by Cedar Creek and it was really close to it. We could see how the firefighters were kind of getting ready to kind of protect the building there,” she added.

"They're doing so much work and they're amazing. They made us feel secure, even though it was just right there.”

The morning after their close brush with disaster, the ranching family is tired, exhausted and a little relieved that their heroic efforts against the wildfire were successful in saving their property.

“We're just grateful, we have enough food to feed an army and the community is still bringing in truckloads of food,” Carter said with a laugh.

The Keremeos Creek wildfire is still very active, classified as out of control and growing. More properties were put on evacuation orders on Thursday afternoon.

The wildfire sparked Friday, July 29 and has so far resulted in the loss of one home. 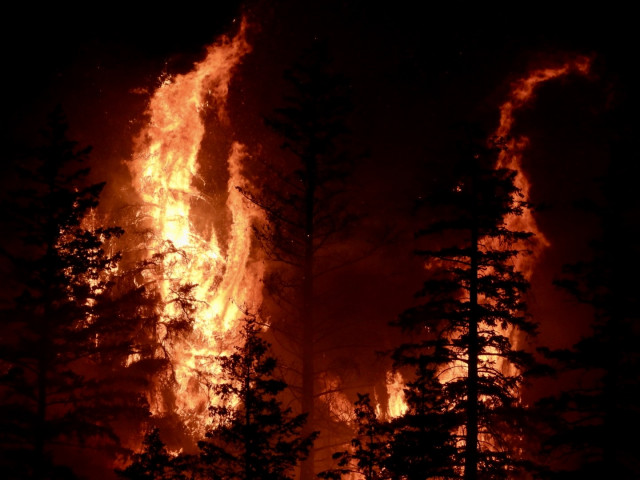