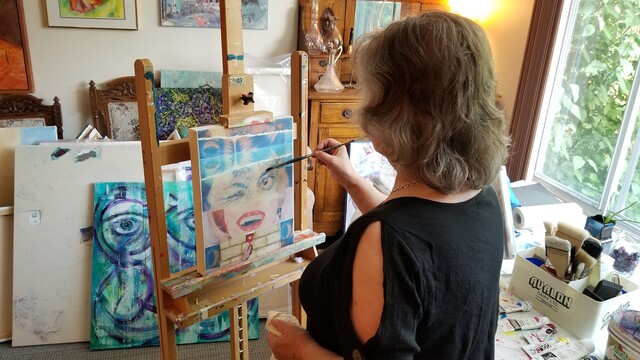 The Long Gallery and Studios has announced their newest exhibit, a solo show by a Penticton local.

Resident Artist Christina Baird is a founding member of The Long Gallery, who will be showcasing a collection of mixed media art in Gene Sequences-Manifesting Deviations.

“In this collection of mixed media art, I deliberately limited my materials, like the finite set of genetic material that siblings draw from. Each piece is an expression of this finite set of elements – each manifesting its own deviation,” Baird said in a press release.

“When I see certain images they inspire me to expand their essence and create something new - I immediately see a version of what is being viewed in a new way, mixed with other images both real and imagined.”

Baird said that in this collection it feels like she used a drawer that is full of media images gathered from her career in the creative industries including Film & Television, Performing Arts, Visual Art, Magazines, and Publishing.

“I take these image pieces and put them together in different ways, adding paint and my photos to unite and connect my visual experiences like puzzle pieces fitting together to create new images, all from the same pieces.”

Gallery Owner Jenny Long said that the show is a “very strong, exciting and energizing body of work.”