Snowbirds no longer performing in Penticton after Tuesday plane crash 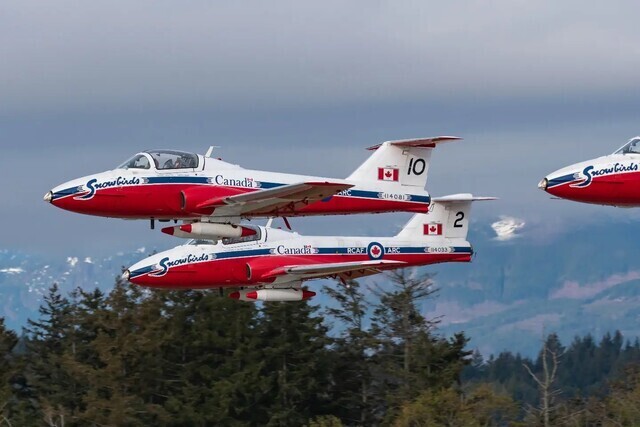 The Snowbirds will no longer be performing in Penticton after one of the team’s aircraft crashed during take-off in Fort St. John earlier on Tuesday.

In a statement, the Canadian Forces Snowbirds confirmed the team won’t be able to take part in their previously scheduled show at the Penticton Peach Festival.

“431 (Air Demonstration) Squadron CT-114 aircraft will not be flown while a Royal Canadian Air Force flight safety team investigates to determine the cause of the incident,” the statement said.

“The CF Snowbirds, while disappointed to not be able to attend, wish both the Penticton Peach Festival and all the attendees the very best.”

On Tuesday, Fort St. John emergency crews attended a hay field near the city airport about 12 p.m., after one of the Snowbirds’ planes, a CT-114 Tutor, crashed after takeoff.

Major Trevor Reid with the Snowbirds said the aircraft had a “hard landing,” but the pilot — the sole occupant of the plane — was not injured.

While there won’t be an air show, the Snowbirds will still participate in the Penticton Peach Festival.

The team have a static display at the airport at 10 a.m., and will participate in the Jennifer Casey Memorial Peach Bin Races at 12 p.m.

The Skyhawks Canada parachute team will still be performing.

More information on Peach Festival events can be found here.