BC Wildfire Service crews are conducting planned, small-scale ignitions along Highway 3A to help fight the Keremeos Creek wildfire.

In a social media post on Tuesday evening, BCWS said wildland firefighting personnel are working together with structural firefighters to implement the ignitions.

“Crews will use a hand ignition technique and structure protection crews will protect power poles and mitigate impacts to the highway,” BCWS said.

“The purpose of this is to bring the fire down to a pre-existing control line by removing unburnt fuel between the fire perimeter and Highway 3A. This will also help minimize spotting potential.”

Highway 3A was closed to traffic as of Tuesday afternoon, with no estimated time of reopening.

The Keremeos Creek wildfire, burning southwest of Penticton, is estimated at about 2,800 hectares in size, and has forced the evacuation of over 320 properties.

There are about 230 personnel from BCWS and fire departments across the Interior assigned to the wildfire.

BC Wildfire Service crews and structural firefighters are currently working together to implement small scale planned ignitions along Highway 3A. pic.twitter.com/eKcdEvgJ8t

"We are not seeing the fire taking off. There has been some 'spiciness' as we say along Highway 3A I'm hearing this afternoon, but we do have a lot more personnel out,” Zandberg said, referring to fire activity close to the highway that connects Penticton and Keremeos.

That highway has been closed as of Tuesday afternoon with no estimated time of reopening.

Conditions have been tough for crews to attack the roughly 2,800 hectare blaze that has forced the evacuation of more than 320 properties.

"It's just such a tight canyon, and people live right there, under the ponderosa pines. And so we are just continuing to put a lot of our efforts to monitoring those areas and every time anything kind of flashes up that we’re not happy with, [we're] knocking it back,” Zandberg said.

He said crews are shifting to be "much, much more aggressive" on the fire, now that temperatures and conditions are cooperating and there are enough boots on the ground — 229, to be exact, made up of BCWS personnel and members from fire departments from all over the Interior.

Up at Apex Mountain village, which has been evacuated, crews are working hard and utilizing the ski resort's snow cannons.

"They have nine or 10 of them set up around the lower village area stretching down towards their quad and triple chair and the idea behind that is to protect the main assets of Apex Resort ... the chair lifts, the restaurants the ski shops, the cafes," explained Molly Raine, fire prevention officer with Apex Volunteer Fire Rescue.

"They're currently wetting down the surrounding areas, but they can just as quickly turn them around to face the buildings and help soak them down. “

Zandberg said the outlook is positive for strong actioning on the wildfire moving forward, but warned that it might be a long road.

"Given where it's burning, it's going to be burning in some of this high country probably for a while. But that doesn't mean that we can't really get things quiet ... So we're gonna keep on actioning it really hard," Zandberg said.

"Right now we are seeing an uptick in fire behaviour in the province. So that's something to bear in mind too. But currently, we've got a good level of resources and more coming on. So we're just going to keep on staying really aggressive and working to fulfill the plans that we have to address the fire's current footprint and the critical values at risk in that area."

For more information on resources for those threatened by the wildfire, click here.

The Regional District of Okanagan Similkameen will have a live update at 2 p.m. on the Keremeos Creek wildfire situation.

Castanet News reporter Casey Richardson was live on scene at Yellow Lake with an update and a look at the conditions at the Keremeos Creek wildfire. Watch the footage above.

Officials have just announced Highway 3A will be closed between the Highway 97 junction and Keremeos until further notice.

The Regional District of Okanagan-Similkameen Emergency Operations Centre (RDOS EOC) has developed a procedure for residents on Evacuation Order to temporarily access their properties.

Residents will need to request temporary access prior to 5 pm for access the next day. Residents in the Evacuation Order area can request a temporary access permit by e-mailing [email protected] or calling 250-490-4231. Temporary Access Permits are for emergencies only, which are life and death issues.

The purpose of the temporary permits is to provide a way for residents to access their properties in a safe and organized manner. The RCMP and other private security are controlling access and protecting properties under evacuation. All residents without permitted access are asked to stay well away from properties on Evacuation Order. 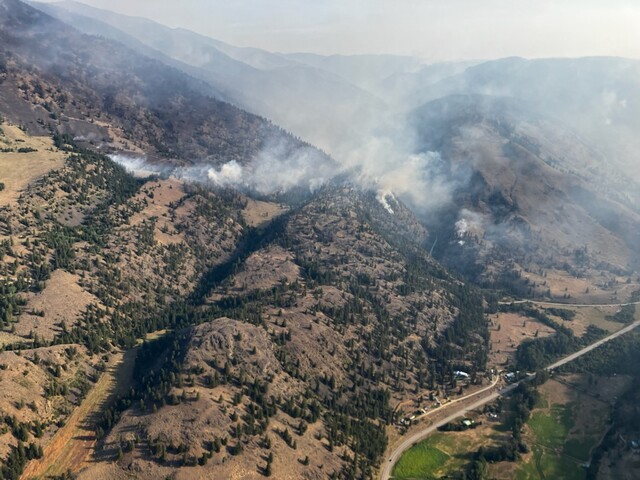 BC Wildfire Service said that the Keremeos Creek fire has moved along the downslope closer to Highway 3A at the south end of Yellow Lake in their update on Tuesday morning.

Mapping estimated the wildfire to be 2,790 hectares as of Monday evening. A portion of the fire was not visible earlier due to smoke.

Fire crews are working on establishing a control line along the highway.

"This will limit growth and allow crews to safely access and establish containment lines," BCWS said.

Airtankers were able to do two passes with retardant on Monday night but were unable to continue due to crosswinds. BCWS crew and structural protection were stationed overnight.

Planned ignitions are anticipated on the east flank in the next 24 hours.

The cause of this wildfire is currently under investigation.

A total of eight helicopters, four pieces of heavy equipment and an additional 115 structural protection personnel from fire departments across BC for a total crew complement of 229 firefighters.

Cooler temperatures are expected to aid the fire fight this week at the Keremeos Creek wildfire burning near Apex Mountain.

"With the inversion, and cooler temps for the next two to three days, crews will be using these conditions to their advantage," the BC Wildfire Service said in a Monday night update.

The fire is estimated to have burned 2,790 hectares.

Structural protection has deployed resources on homes and infrastructure as needed, and triaging additional sites will continue as required.

With temperatures forecast to continue to cool over the next few days, crews will be using these conditions to their advantage.

Meanwhile, the fire's growth is in steep, inaccessible terrain.

"Much of the wildfire is located in terrain that is inoperable for air tanker and heavy machinery support; however, the fire has moved into an area to the west that is accessible to be worked using heavy equipment. Heavy equipment is being used to build line in Sheep Creek, protecting values."

Hedley-Nickleplate Road and Green Mountain Road are both closed in the fire zone.

A total of 144 firefighters are assigned to the fire, supported by nine helicopters and four pieces of heavy equipment. 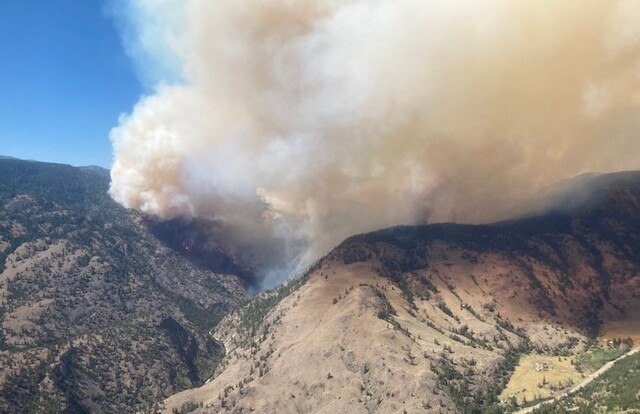