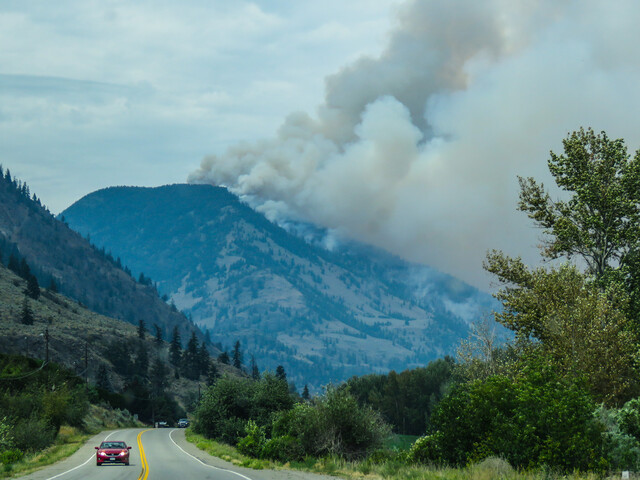 Photo: Kate Harper~McGregor
The Keremeos Creek fire as viewed from Highway 3A on Monday.

The Keremeos Creek Wildfire has grown close to 2800 hectares as of Monday night.

BC Wildfire Service said in their update that the perimeter map that is currently posted does not include a portion which was not visible due to smoke. Once the smoke cleared a more accurate perimeter was obtained.

The heatwave added to the intensity of the fire outside of Penticton which started on Friday afternoon, causing 324 properties to be put on evacuation order and 438 on evacuation alert. The full list of properties can be found here.

"Penticton ESS volunteers worked tirelessly to ensure each evacuee had a bed tonight before we closed at 7 p.m.," he said.

The reception centre is set up at Princess Margaret Secondary School at 120 Green Ave. in Penticton, for those who need immediate assistance.

It will be open again tomorrow from 9 a.m. to 5 p.m. to continue supporting the RDOS and those impacted by the Keremeos Creek Wildfire.

BCWS crews and structure protection are assigned to continue overnight on the fire.

"Structural Protection has deployed resources on homes and infrastructure as needed and triaging additional sites should continued work be required," BCWS said in their update.

Contingency lines are continuing to be built on the south side of the ravine on Sheep Creek Road, while hand lines are being built at the south of Green Mountain Road over to Highway 3.

BCWS said that they expect to use the cooler conditions to their advantage over the next few days as temperatures drop.

Fire growth has continued to be in steep and inaccessible terrain.

A new evacuation alert has been issued by the Regional District of Okanagan-Similkameen due to the Keremeos Creek wildfire.

It includes White Lake and Twin Lake communities, Highway 3A between Green Mountain Road and Olalla east of Highway 3A. The full list of properties can be found here.

Photo: BC Wildfire Service
New map showing the extent of the Keremeos Creek as of August 1, 2022.

The fire has moved a lot closer to Highway 3A, but so far, the road remains open.

“There is no road closure anticipated right now. That said, it’s not a very predictable fire. It is an out of control wildfire,” said BCWS information officer Bryan Zandberg.

’We are definitely in close contact with the Ministry of Transportation and Infrastructure around road closures. Same with our First Nations partners too. We’re working quite closely with them on the road closures that we need to put in place to protect everybody.”

Officials were asked about people wanting to access their properties in the Apex Mountain village, which is under evacuation order.

“From what I understand, basically, if anyone is at Apex and they've left because of the evacuation order, you certainly can’t return,” said Erick Thompson, communications co-ordinator for the Regional District of Okanagan-Similkameen.

“I know there were some people who were trying to get back into the area, and at this time of day it's unlikely that that would be possible. Because the idea of an evacuation order is to get people out, get them safe. So to have people heading back up there is challenging,” he adds.

Thompson said if you are a property owner and come to the checkpoint, the crew stationed there might let you in, but it’s unlikely. 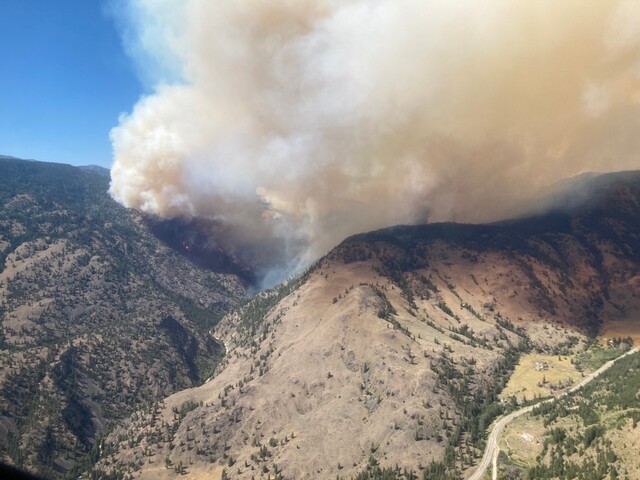 The size was updated after BCWS flew the perimetre earlier in the day.

Zandberg says the fire exhibited Rank 4 and 5 behaviour Sunday night. Some wind gusts and the possibility of thunderstorms are expected later today.

New evacuation orders have been issued by the Regional District of Okanagan-Similkameen as a result of the fire.

Evacuation orders are now in effect for Sheep Creek Road south, north of Olalla and Highway 3A.

Fifty three new addresses have been added to the evacuation list.

Most of the homes on order and alert are in Electoral areas I and G.

The RDOS confirmed that a structure destroyed in the fire was a home and it was occupied at the time, but the resident got out safely. 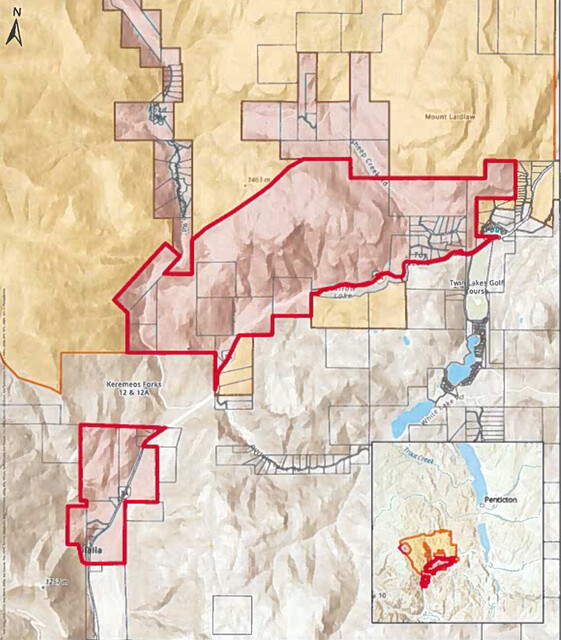 The Regional District of Okanagan-Similkameen is hosting a live video update at 2 p.m. to provide information on the Keremeos Creek Wildfire.

The fire has prompted evacuation orders and alerts for several properties, including the Apex Mountain village.

If you are on an evacuation alert or order, or if you have been displaced from your home, you can self register with Emergency Support Services online or call 250-486-1890.

The Keremeos Creek wildfire grew Sunday evening and a new size estimate is expected later today, according to the BC Wildfire Service.

The fire, which has forced the evacuation of the Apex Mountain village, was “moderated” by an inversion on Sunday until about 2 p.m. when the blaze took a run on its southwest corner.

“The fire grew and we are waiting for a more accurate size which will be posted later today,” BCWS said online. “This morning, the fire is again being moderated by an inversion and when it dissipates midday we again expect to see increased fire behaviour.”

Fire growth has been occurring in steep and inaccessible terrain, so ground crews are building contingency lines while continuing to concentrate their efforts on areas impacting residents.

There are now 144 wildland firefighters on site being supported by structural protection crews from local fire departments in the region. Nine helicopters and four pieces of heavy equipment are being used.

"Much of the wildfire is located in terrain that is inoperable for air tanker and heavy machinery support; however, the fire has moved into an area to the west that is accessible to be worked using heavy equipment. Heavy equipment is being used to build line in Sheep Creek, protecting values," BCWS said.

Close to 400 people are expected to be impacted by an evacuation order issued Monday morning at Apex Mountain village.

The City of Penticton says its Emergency Support Services Centre — at Princess Margaret Secondary at 120 Green Avenue — will provide help to the evacuees.

Emergency officials are suggesting evacuees stay with friends or family if possible to keep hotel capacity free for those who have no alternatives.

"No matter which option you choose either come into the ESS or call us. We want to make sure everyone has all the support and information they need and ensure everyone is safe," says Adam Goodwin, Penticton’s ESS co-ordinator.

Emergency Support Services is only provided if your primary residence is one of the properties under evacuation order. ESS can be reached at https://ess.gov.bc.ca/ or by calling 1-800-585-9559.

“Our job is to make sure everyone of our neighbours are safe and that they have what they need to get through this stressful time,” says Goodwin.

“As a community, we’ll all do what we can to help and we’re extremely grateful to community members who are opening up their homes. We don’t anticipate any major problems with accommodation or undue stress on local room capacity.”

Those wishing to support the evacuees financially are encouraged to either make a donation to the Red Cross or drop off gift cards at City Hall during regular hours.

In addition to an evacuation order for the Apex Mountain village, the RDOS has also expanded the evacuation alert area around the Keremeos Creek wildfire.

New addresses on Resolute Road, Highway 3A, Toy Creek Road, Green Mountain Road and more have been added to the evacuation alert area. Impacted residents should pack and be ready to leave at a moment’s notice.

A list of addresses now on alert can be found here.

An evacuation order has been issued for the Apex Mountain Resort area as the Keremeos Creek wildfire continues to burn nearby.

The evacuation order was issued at 8 a.m. by the Regional District of Okanagan-Similkameen Emergency Operations Centre.

Residents must leave the area immediately.

A complete list of affected addresses can be found here.

Members of the RCMP and search and rescue teams will be expediting the action, the RDOS says.

Evacuees can register at the reception centre at Princess Margaret Secondary School in Penticton or online at ess.gov.bc.ca.

Anyone requiring transportation assistance from the evacuation area or identify as having extraordinary needs, is asked to call the RDOS EOC at 250-490-4225

Pet owners with concerns for their animals can make arrangements with ALERT by calling 250-809-7152.

The Keremeos Creek wildfire was active near Highway 3A on Sunday, concentrating firefighting efforts in that area, according to the BC Wildfire Service.

In a social media post on Sunday afternoon, BCWS said the fire had been relatively quiet over the weekend, but activity picked up on the southwest corner, near the highway.

“This activity is highly visible. Crews and structural protection have concentrated much of their efforts in the area,” BCWS said.

On Sunday, the City of Penticton said a temporary camp would be set up at the Adidas Sportsplex and Kings Park to house about 100 crew and firefighting equipment.

The city said the firefighters were moving into the camp as of Sunday night.

“Much of the wildfire is located in terrain that is inoperable for air tanker and heavy machinery support, however the fire has moved into an area to the west that is accessible to be worked using heavy equipment,” BCWS said.

“Heavy equipment is being used to build line in Sheep Creek, protecting values.”

BCWS said First Nations and other partners are helping to evaluate contingency lines.

Apex Mountain Resort’s snowmaking guns were placed in strategic areas to help form another level of defence if the wildfire comes closer to the area.

James Shalman, general manager for the resort, said the snowmaking guns pump out water about 150 feet in the air.

“The idea in the winter is that that water freezes and falls down as snow. But in the summer, it’s one massive sprinkler system,” Shalman said.

The 437-hectare wildfire was discovered on Friday, July 29 and has prompted an evacuation order for 25 properties around Ford Lake.

Hundreds more — including Apex Mountain village — are on evacuation alert.