A temporary camp for BC Wildfire Service firefighters battling the Keremeos Creek blaze will be set up at the Adidas Sportsplex and Kings Park in Penticton.

According to a statement from the City of Penticton, the site will be used by BCWS crew starting Sunday night.

“BC Wildfire will be utilizing the Adidas Sportsplex and Kings Park for approximately 100 crew and apparatus over the next few days to assist in fighting the Keremeos Creek wildfire,” the city statement said.

The team is supported by structure protection personnel and dozens of fire suppression crew.

The 437 hectare wildfire is burning southeast of Apex Mountain.

James Shalman said the snowmaking guns are currently being placed in strategic areas.

“We actually have some of them in place right now, we're getting the other ones together,” Shalman said.

He said the snowmaking guns have always been part of the resort’s wildfire response plan.

“The snowmaking guns pump out a lot of water — about 150 feet in the air — and then the idea in the winter is that that water freezes and falls down as snow. But in the summer, it’s one massive sprinkler system,” Shalman said.

He said the 437 hectare Keremeos Creek wildfire doesn’t present an immediate threat, but they are putting the machines in place proactively, as another level of defence.

“It takes a lot of time to set the snowmaking systems up, and we're working with BC [Wildfire] Service as well, making sure that we're ready if it does come close, that we can do whatever we can do to fight it.”

The wildfire was discovered on Friday, July 29, and has prompted an evacuation order for 25 properties around Ford Lake. Hundreds more — including Apex Mountain village — are on evacuation alert.

In a Sunday afternoon update, the BC Wildfire Service said an Incident Management Team has assumed control of wildfire response.

The Incident Management Team will take on elements of response such as safety, finance, logistics, planning and operations.

“The IMT helps to relieve pressure from the local fire centre and zones, allowing them to focus on responding to new fire starts,” BCWS said.

BCWS said the wildfire, burning southeast of Apex Mountain, has been largely located in terrain inoperable for air tanker and heavy machinery support.

However, BCWS said the fire has moved west into an area accessible for heavy equipment.

Minimal growth was observed on the fire over Saturday night, with personnel working through the night to conduct patrols and set up structural protection. 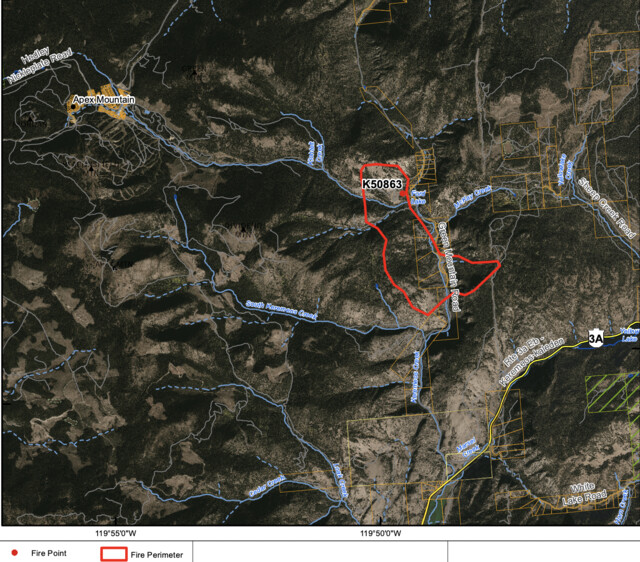 There was minimal growth on the Keremeos Creek wildfire overnight.

The fire remains at an estimated 437 hectares in size, but low visibility is hampering efforts to get the wildfire southeast of Apex Mountain under control.

The BC Wildfire Service says the conditions are currently presenting challenges for aerial support resources. One helicopter is on site, and three choppers are available once visibility improves.

About 25 properties in the area around Ford Lake remain on evacuation order while hundreds more — including the Apex Mountain village — are on evacuation alert.

The fire was mapped Saturday evening at 437 hectares in size and is burning in terrain inoperable for heavy equipment or air tankers. Helicopters, ground crews and para-attack firefighters actioned the fire Saturday and will continue to do so on Sunday.

Firefighters from across the South Okanagan are assisting with structural protection duties. Emergency officials said Saturday that at least one small residential structure has been lost in the fire.

“Apex Volunteer Fire Rescue is fully aware and we are working with BC Wildfire Service and the RDOS to coordinate and develop a structure protection/defense plan along with acquiring/positioning appropriate resources,” said the Apex Mountain Volunteer Fire Department on Saturday night.

The BC Wildfire Service says it is mobilizing all of the region's resources to battle the fire. Crews have been training for the past week amidst the heat wave with the expectation that fire activity surges.

Fifty wildland firefighters and an incident command team were assigned to the fire as of Saturday night.

Castanet will provide updates on the fire here throughout the day.

Photo: BC Wildfire Service
View of the Keremeos Creek wildfire on July 29, 2022