The City of Penticton has been placed under a state of local emergency in response to flash flooding Monday afternoon, and a special hotline and reception centre have been set up.

More than 70 residents have already reached out with concerns about their properties dealing with an influx of water. Three properties so far have been recommended evacuated by Penticton Fire Department crews who are responding to the calls.

Eight PFD personnel are out in the community dealing with those calls for help and rapid damage assessments, and according to Emergency Operations Centre director Anthony Haddad, they are currently keeping up with demand.

Roughly 50 city staff and RCMP members are out in the field currently assisting as well.

An Emergency Support Services reception centre has been set up at 199 Ellis Street for anyone whose property has been deemed uninhabitable.

Sandbags have been made available at the City's Public Works Yard at 616 Okanagan Avenue, free to the public, and anyone needing assistance or direction can contact the hotline at 250-490-2307 ext. 7.

The EOC will remain open throughout this weather event, which may not yet be over.

"This is not a typical July in the CIty of Penticton, this storm came out of nowhere. We knew there was something coming but not to the extent that it happened," said Mayor John Vassilaki at a Monday evening press conference.

"I'd like to remind the public to please be very, very cautious. Stay away from the creeks because they're fairly high at this point. There's a lot of pooling of water on our streets and they're very dangerous ... There might be another storm coming along in a little bit and we want you all to take precautions to make sure that your family is safe and stay home, if at all possible, rather than being out in the world."

Watch the full update issued Monday evening from Haddad and Vassilaki above.

The City of Penticton is urging any residents experiencing flooding or who have concerns about the safety of their homes to contact 250-490-2307 ext. 7.

The City’s Emergency Operations Centre is responding to overland flooding from the flash rain event and are bringing in rapid damage assessment teams as well as public works to assist residents and assess impacts to public infrastructure.

Sandbags are available for residents at the Public Works Yards Building at 616 Okanagan Avenue.

There have also been reports of dangerous driving conditions on Penticton roads. Drivers should watch for pooling water, gravel, debris and large rocks. Public works crews are clearing roads on a priority basis.

DriveBC reports that there is flooding on the Channel Parkway between Fairview Road and Duncan Avenue, and that motorists should expect delays. 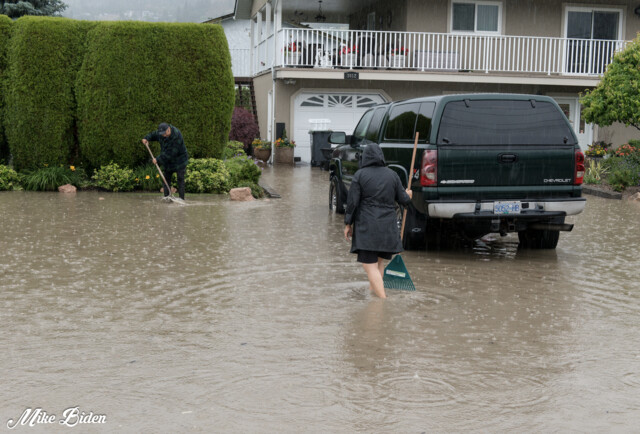 A brief storm of heavy rain in Penticton saw many local streets overwhelmed by water.

One Castanet reader captured the scene at Warren Avenue and Government Street. An entire lane of the road was flowing water, and the sidewalk was inundated.

Reports of similar situations in other areas of the city have also been sent to Castanet.

The rain, which began shortly before 2 p.m. Monday as part of a storm system heading north, is less intense as of 2:30 p.m.

A severe thunderstorm warning remains in effect for the region.