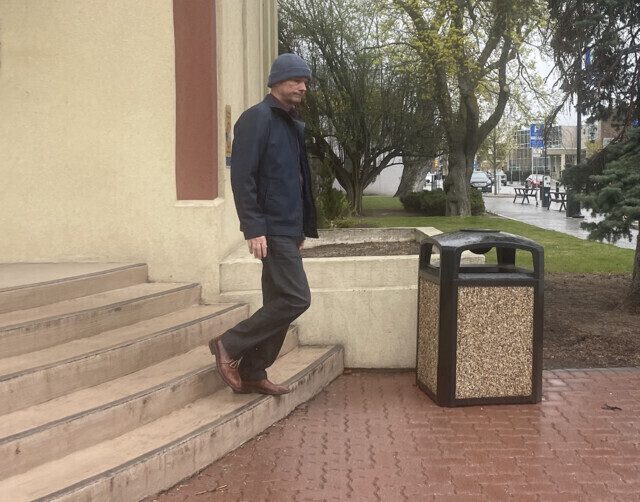 Lawyers for accused Osoyoos killer Roderick Flavell will argue there is insufficient evidence for the trial to proceed and ask the judge to dismiss the case.

Flavell, in his early 60s, stands accused of manslaughter in BC Supreme Court in Penticton. His 61-year-old wife Tina Seminara was found unconscious with multiple injuries in their disarrayed living room on April 8, 2010.

She never regained consciousness and died in hospital just over a week later.

Over five days of the trial last week, Crown prosecutors Ann Lerchs and Andrew Vandersluys laid out their case against Flavell.

Uncontested evidence shows he emailed RCMP the evening of his wife's death, with the subject line "Death," asking for help with the family dog and saying "this happened all of the sudden."

He texted a neighbour twenty minutes later, "Roger, sorry to lay this on you buddy, call 911. Tina breathing, but may need help."

Flavell's lawyers also do not contest that he showed up at the local RCMP detachment roughly an hour later, asking attending cops whether they had checked on his wife yet. He had bloodstains on his clothing, and a rope and knife in the passenger seat of his vehicle, and was taken into custody at that time.

Court heard testimony last week from police and EMTs who responded that night to the Cypress Hills home Flavell shared with Seminara. They saw broken glass, upturned furniture, dark stains on the carpet and sectional couch, and bruising to Seminara's face as well as a severe leg injury.

Doctors who treated her that night and in the days that followed testified to symptoms of brain damage.

An autopsy report ruled her death a result of "hypoxic-ischemic encephalopathy (HIE)," which in layman's terms means decreased oxygen, decreased blood supply and death of nerve cells in the brain leading to the shutdown of the body's organs.

That can be caused by trauma; however, when questioned, pathologist Jason Doyle noted that there are other possibilities.

"Blunt force trauma may have been the underlying cause to this brain injury but I cannot be certain," Doyle said Friday.

"The underlying cause of the HIE is undetermined."

Throughout the week, Flavell's defence team repeatedly probed witnesses and experts about Seminara's medications, history with alcohol, and brought up seizures on more than one occasion — when asked, Doyle said a similar HIE injury could be caused by a lengthy seizure.

After a four-day break, trial resumed Wednesday with a few more agreed submissions of fact. Flavell's defence team acknowledged continuity of the chain of custody for three vials of fluid taken from Seminara in hospital, and that she never regained consciousness.

The Crown rested its case, and Flavell's defence immediately stated they would be filing a motion to have the case dismissed due to a lack of evidence supporting the manslaughter charge.

Canadian law defines manslaughter as a death that took place without intent to kill, but there may have been intent to harm.

Flavell's lawyers will have the floor in court Thursday morning to present their arguments for dismissing the charges.

For more of Castanet's coverage of this case, click here.