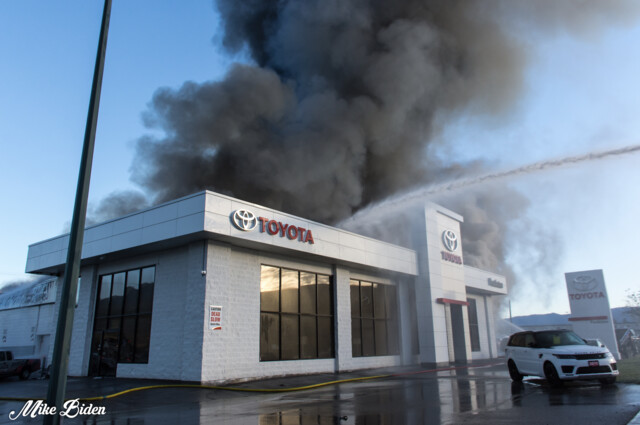 A devastating early morning fire that gutted Penticton Toyota Wednesday has been deemed arson, and two people have been arrested.

At 4:30 a.m. Wednesday morning, the Penticton Fire Department rushed to the dealership and spent more than four hours fighting a blaze that engulfed the dealership's shop building.

"There is more work to do and more details will be forthcoming at the conclusion of our investigation and subsequent charges. At this time we have nothing to indicate there is a further risk to other businesses or the public."

That was all police had to say in a news release Thursday.

Penticton Toyota general manager spoke to Castanet Wednesday, calling the blaze "devastating," and asking for the community's patience while they sort out next steps.

"I know there's probably a lot of questions that they have, am I gonna go to pick up my car, can I bring in my car for service, people that were put in for service today. So we would ask for a little bit of patience as we kind of come up with the next steps as far as being able to come up with temporary operating practices until we are able to move back into this building," Larry Pidperyhora Jr. said.