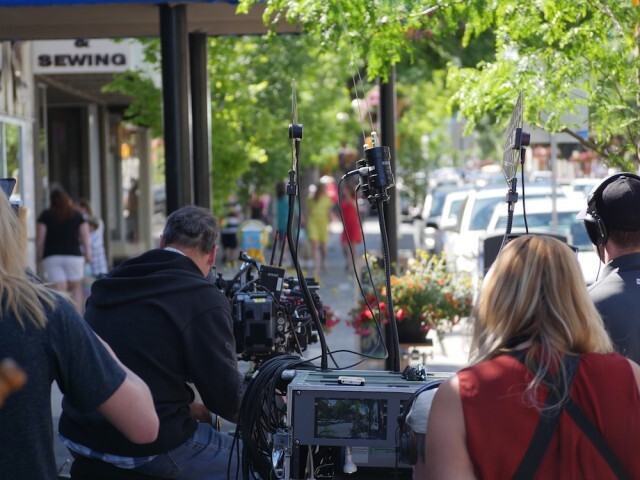 Photo: Castanet Staff
A Hallmark film shooting in Penticton in a previous summer.

A growing Okanagan film industry means more demand for local actors, and a new grant means a Penticton group has the tools to teach the trade.

Tempest Theatre and Film Society is encouraging anyone interested in the business to check out their variety of new courses and events specifically designed for new actors navigating their careers. They hope to help build a robust Okanagan film industry in its own right.

“We’ve really been trying to listen to the wants and needs of the community," said artistic director Kate Twa.

“I watched the rapid growth of the industry in Vancouver in the 90s and have ideas on how to encourage and support healthy development here in the valley. I think it will get busier and busier.”

Travel and work restrictions during the COVID-19 pandemic forced many production companies to find new locations to shoot, and the Okanagan Valley became a hotspot almost overnight. Local talent became highly in demand.

"Aside from the stunning landscapes and the variety of locations our region presents, external production companies are attracted by the tax credits offered to projects that shoot in rural areas and employ local talent and crew. It’s a significant edge we have on the usual filming centres such as the Lower Mainland. But we have to have the people here to do the work or we will lose this opportunity," said Okanagan Film Commissioner Jon Summerland.

Regionally-filmed productions in locations like the Okanagan can attract an up to 18.5 per cent tax credit on related expenses, including hiring crew and talent.

While that's good news for the Okanagan, it is also in competition with areas like Vancouver Island and elsewhere in the Interior.

"So, we need to continue to meet demand," Summerland said.

Tempest has secured a grant from the BC Arts Council and partnership with Community Futures Okanagan Similkameen to offer a suite of skills-training sessions for actors, ranging from a few hours, to several days, to a by-application-only nine-day acting intensive.

"We are offering classes to a full range of students. To those who may want to try something new, improve public speaking and explore fun techniques to amplify expression and connection, as well as to those pursuing a career in acting," Twa said.

"Since we started providing film and TV related classes, we’re seeing our students get auditions, book roles and really grow in their careers ... There is a fulfilling and exciting pathway for someone who is willing to do the work and be serious about acting as a profession."

Ideally, she added, local talent will also start to grow in other areas like screenwriting, directing, crewing and post-production.

"Growing our own industry here in the Okanagan, one that we all co-create and build by design? Now, that’s exciting and completely within our abilities as a region.”

Tempest's classes run year-round, and are always taught by instructors who are active in the industry with decades of experience.

Find out more about the training opportunities Tempest is offering here.